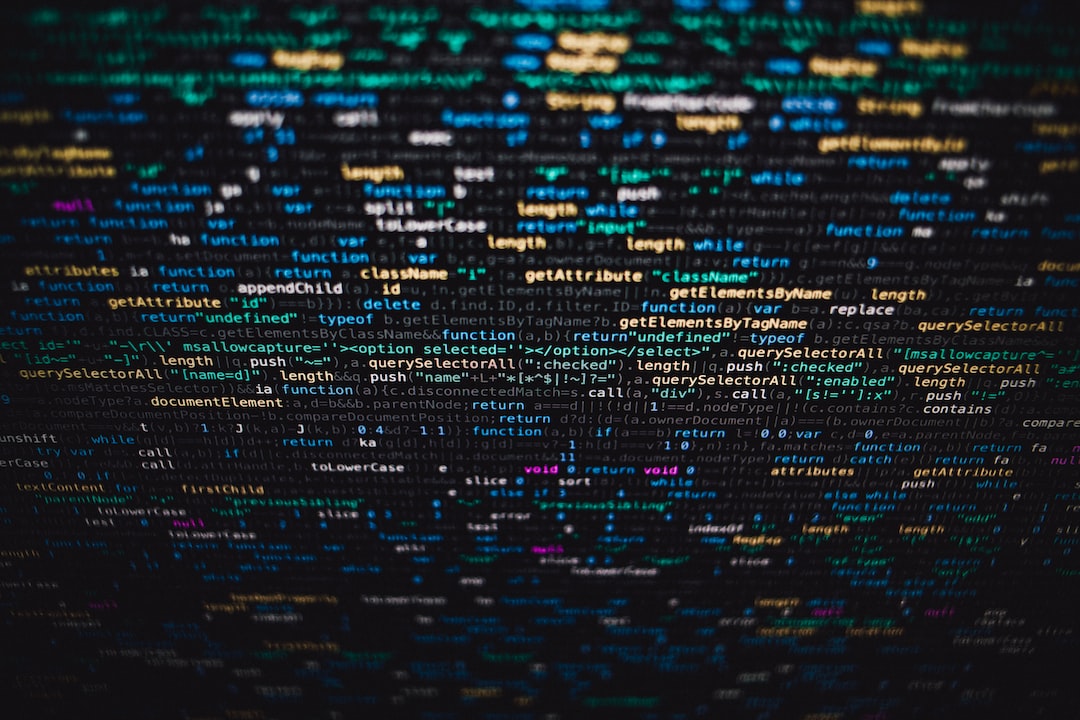 The UK's Intellectual Property Office has published the latest edition of its
Online Copyright Infringement Tracker report. Illicit consumption of movies increased considerably over the previous period, with a new category of live sports leaping almost to the top of the infringement tables. Interestingly, the report also highlights a significant decrease in hardcore pirates. 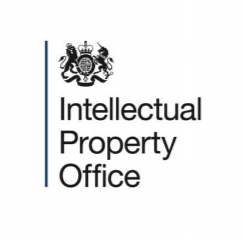 In an effort to provide a comprehensive overview of online consumption
habits in the UK, for the past several years the Intellectual Property Office has published its Online Copyright Infringement Tracker.

At 158-pages long, the report is certainly comprehensive but it does come with an important note. In common with similar consumer surveys, there are concerns that respondents may not tell the whole truth when asked about their illegal activities. With this in mind, instead of asking people whether their sources were illegal, respondents were given a list of options with the categorization being done behind the scenes.

Importantly, one of the options was “Download/access for free from the internet, without really being sure where it comes from”. This category was completely excluded from illegal/legal calculations and consumers who only utilized these sources were omitted from the results. This means that caution should be applied when comparing this wave’s results to the previous year’s.

The published infringement figures are based on the number of people who used at least one illegal source during the previous three months.
The headline figure is that 25% of the online content consuming
population did so, a figure that has remained static for the past three years. However, there have been some considerable shifts when individual categories of content are considered.

In the area of films, for example, there was an 8% increase in the proportion who used an illegal source, up to 27% of online consumers.
Music, on the other hand, remained largely stable at 20% (19% in 2018).

Both TV and video game piracy are on downward trends, with the former
dropping from 23% to 17% and the latter from 16% to 6% over a single year.

However, the addition of a new category (live sports) and the broadening of the e-publishing category to include content beyond just eBooks, reveals large volumes of infringers. From not being counted in 2018, 34% of online consumers said they pirated live sports at least once in the previous three months, with the e-publishing numbers jumping from 13% to 35%, making it the most-infringed category overall. 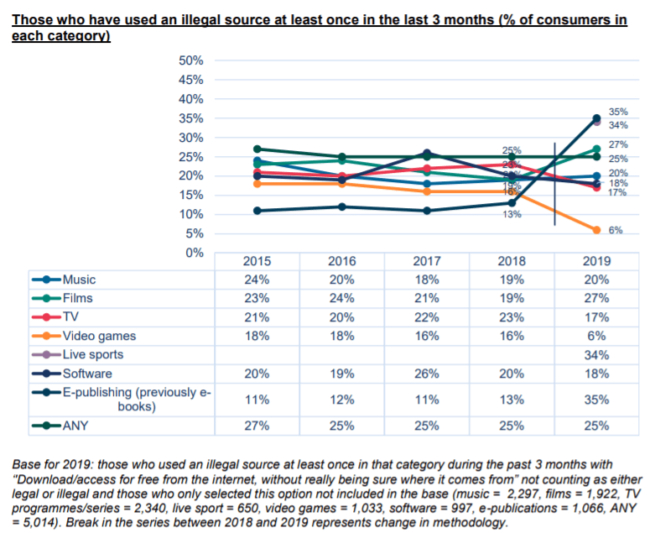 While the headline infringement figure has remained static and some
categories show significant shifts, the report notes there are encouraging signs in respect of consumers who can be considered hardcore pirates, i.e those who do not consume from legitimate sources at all.

“Across most categories, it is encouraging to note that between 2018 and 2019 there was a decrease in the proportion who only used illegal sources. Where overall infringement levels remained the same, this proportion seemed to migrate towards using at least some legal sources,”

Films, for example, where the 8% increase in some infringement may be considered a setback by the movie industry, the number of hardcore pirates plummeted from 11% down to just 2%. 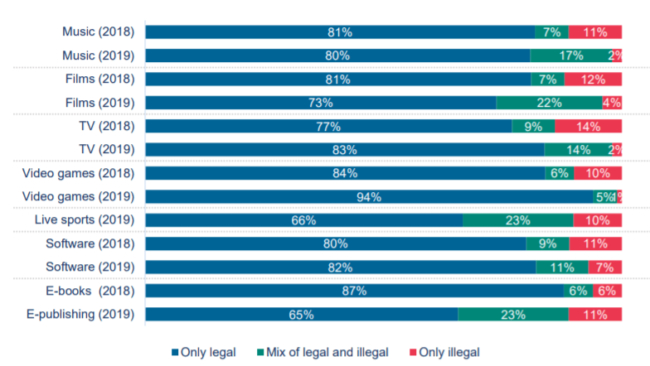 When the entire UK population is considered, the report estimates the following numbers of infringers: 5.7m for film, 5.1m for music, 4.4m for TV, 4.1m for e-publishing, 2.4m for live sports, 2m for software and 600,000 for video games.

Men were more likely to pirate music, films, TV shows and video games, but women come out on top when it came to live sports, software and e-publishing.

Interestingly, the report also touches on VPN usage, noting that “across all categories, respondents who had used VPNs were more likely to have infringed compared to those who had not. This difference was most pronounced in film (+13%), TV (+11%), software (+11%) and music (+8%).”

Somewhat inevitably the report also drills down into what would happen if pirate sources dried up. Would people start to pay out money (or indeed more money for dual-use consumers) or would free legal options prove more attractive?

In respect of video games, already one of the lowest-pirated mediums,
68% of people who admitted to piracy in the previous three months said
they would turn to paid sources. When it came to films and TV, 57% and
46% respectively indicated they would hand over cash to a service such
as Netflix or Amazon Prime Video, while 32% and 44% would seek out free
services such as YouTube or BBC iPlayer.

Just over a third of music pirates (34%) said they would migrate to a paid service if pirate sources ceased to exist, with Spotify and Apple Music coming out on top. However, 61% said they would prefer not to pay, instead searching out free music on sites such as YouTube.

When considering live sports, companies such as the Premier League and Sky will be interested to learn that almost half of infringers (49%) said they would shift to a premium service if pirate options were limited, with 31% still determined to track down free legal sources.

Finally, the report highlights three broad drivers that lead people to access all types of content illegally, even when they may already be paying for content.

“The abundance of free and widely accessible illegal content means that even those concerned about infringing may occasionally resort to using unofficial sources if they want the content badly enough. A few mentioned the near obsessive mindframe of not finding something on legal channels but knowing it is ‘out there somewhere’ and hunting it down,”

“Another factor is the cost of accessing content and a desire to limit spending. Given the amount of content that is increasingly available, consumers are worried about overspending. As such, the opportunity to turn to free, illegal methods is valued. It enables them to access the content they want without exceeding their budget.”

Since finding and accessing illegal content is considered simple, quick and easy to carry out, consumers may actually save time and effort when compared to obtaining material from official sources, the research suggests. Not having to sign up or search through multiple legal platforms for desired content may actually be a time-saver, so improvements can probably be made here.