The developer behind the Red Dead Redemption: Damned Enhancement Project is fighting back against a copyright infringement lawsuit filed by Take-Two. Among other things, Johnathan Wyckoff states that he believes he was working within the rules published by Take-Two, which state that
the company will not generally take legal action against non-commercial single player projects.

The supposed plan of ‘DamnedDev’ (real name Johnathan Wyckoff) was to modify the Xbox360 and PS3 versions of RDR1 and bring the game to the PC while improving the game with better graphics and additional features. In September 2019, however, Wyckoff revealed that he was being “bullied” by a corporation. A lawsuit filed at a New York court in December revealed that Take-Two was taking action to bring the project to an end.

Citing breaches of its intellectual property rights (direct and contributory copyright infringement) and user licensing agreements, Take-Two said that it had repeatedly asked Wyckoff to cease and desist but when the project continued, it had no other choice than to take legal action. It did so on two grounds.

Firstly, the lawsuit targeted the RDRII Project, which reportedly aimed to add the RDR1 game map to RDR2. It went on to make claims about the Damned Enhancement Project, which would reportedly enable users to
play RDR1 on PC, where it isn’t officially available, “thereby destroying the market for an official, updated version from Take-Two, and creating competition for Take-Two’s PC-version of RDR2.”

The case has been rolling on for several months now and this week Wyckoff filed an answer to Take-Two’s lawsuit along with a series of
counterclaims.

Describing himself as an “enthusiastic player” and modifier of Take-Two videogames, Wyckoff first provides a short background on what modding is all about, such as improving game graphics or changing features. He claims that this activity is accepted by gaming companies which typically publish a ‘mod policy’ to explain what type of mods are allowed. He believes that he acted within the boundaries set out in the Rockstar/Take-Two policy.

“Defendant believes it was acting in accordance with the Plaintiff’s published policy on ‘PC Single-Player Mods’ which says that ‘Take-Two has agreed that it generally will not take legal action against third-party projects involving Rockstar’s PC games that are single-player, non-commercial, and respect the intellectual property (IP) rights of third parties,” 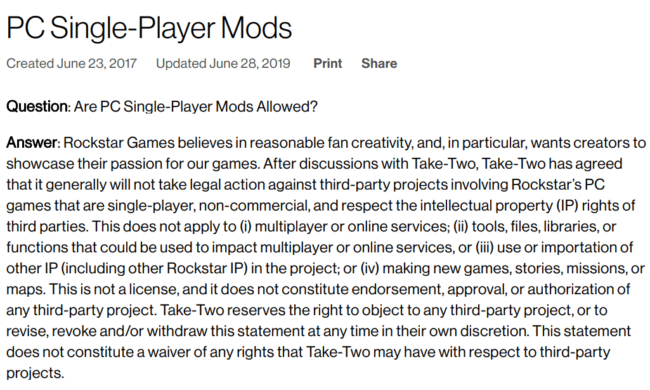 From here, Wyckoff refutes many of Take-Two’s allegations, including that his RDR2 mod “did not contain maps” from the original RDR1 game and that the publisher’s description of the mod appeared to describe a previous mod he developed (RDRV) “that was abandoned in 2017 at the
request of the Plaintiff.”

As the above ‘mod policy’ lays out, to meet the criteria any mod must be non-commercial. In its lawsuit, Take-Two implied that donations solicited by Wyckoff were used to create the “infringing programs” which were then used to “drive followers” to his social media and streaming accounts. Wyckoff sees things differently.

“Defendant asserts that it is a hobbyist and worked on the project without expecting or soliciting compensation for the mod,” he writes.

“Defendant denies receiving any compensation for its mod projects.”

In its lawsuit, Take-Two wrote that it had hoped to settle the dispute with Wyckoff without resorting to the courts. However, the company claims that rather than ending his activities, Wyckoff suggested that the project might get “leaked” by him or others. In his answer, Wyckoff admits to discussions with Take-Two but denies that he ever threatened to leak the project online. In any event, he says he’s in no position to do so.

“Defendant no longer has access to the mod project files and does not intend to redevelop them,” he writes.

“Defendant will not restart work on the now-lost mod files and has expressly agreed to same,”

he adds, noting that all claims that Take-Two has been injured in any way are also refuted, not least since the mods were never released.

In conclusion, Wyckoff says that since everything he did was within the parameters of Take-Two’s ‘mod policy’, all copyright infringement claims should be rejected and the court should issue a declaration to that effect or, in the alternative, determine that Wyckoff is an innocent infringer.

Finally, he points to the fact that Take-Two’s ‘user agreement’ contains a clause that compels parties in dispute to enter into an arbitration process (that Take-Two must pay for) to settle their differences. Wyckoff wants that to happen.