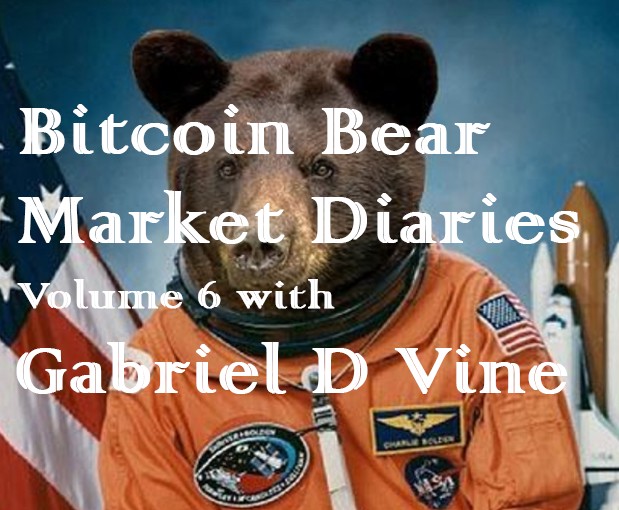 Gabriel D Vine is a veteran Bitcoiner and has a ton of experience and insight into the space. Many know him from the podcast The Bitcoin News Show and his interesting conspiracy theories.

Coming up on 6 years!

Getting paid in Bitcoin by a client for a project.

It’s hard to imagine any legitimate threat to Bitcoin at this point. I just can’t see anything stopping this juggernaut.

By definition they’re losers, doomed to irrelevance. If you can’t commit to consensus with the network, you’re destined to disintegrate in further forks until you’re worthless.

Developers, layered protocols, privacy, sound money economics, and an adversarial “toxic” culture. This is the recipe for a software monetary revolution.

I was right: Bitcoin is just as cyclical as it seemed.

Incredibly optimistic. To think that the white paper and original intro video dropped only three years ago is mind-boggling. I’ve been spazzing about it since then and it’s only proving my predictions right. Currently the devs are solving very important backup and UX issues in order to make usage dependable and secure. That’s often the final step before wider mainstream adoption of technologies. It’s all just in time.

Bitcoin is vying to be a risk-free monetary asset as gold was 150 years ago, so saving in bitcoin becomes more logical with every reduction in price volatility. I wouldn’t save any other digital “asset”, that’s for sure.

I do not believe any other digital commodity can become money other than the first done right, Bitcoin. So, any altcoin pretending to the mantle of currency is doomed permanently. However, it’s conceivable to me that utility tokens could gain usage in specific systems one day as digital version of today’s industrial commodities.

Yes: I own a few satoshis’ worth of Maidsafecoin, which is a colored bitcoin that will one day be exchangeable for MaidSafe’s final launch of safecoin. MaidSafe, an encrypted data and networking layer that rides atop the internet, is an example of a system whose incentives might one day line up and become viable. The project has been going more than twelve years and has a very steep path ahead though, with a high likelihood of failure.

Scammers gonna keep scamming. The next altcoin wave will make more millionaires and paupers who lost their life savings. At some point though, the scams will find it exponentially harder to find the next fool.

It’s just one of several possible scenarios. I have a feeling it will happen, but more slowly than many think.

CoinKite, Lightning Labs, Chaincode Labs, Blockstream, anything Nicholas Dorier or Francis Pouliot do, and so many more. It’s a Cambrian explosion of talent lately . . . so many amazing projects and businesses.

I mute those suckers. In fact, I tend to mute anyone who uses the words “crypto” or “cryptocurrency”.

The lastest push towards “bitcoin-only” is probably smart.

I’m more bullish than ever. I keep raising my “top of the S-curve” price/value projection based on the tech advancement and lack of viable threats. Currently my prediction is $12,000,000 per bitcoin as soon as 2027.

Read a couple pages each on Wikipedia about 1. open source software, 2. digital cryptography, 3. Austrian economics, and 4. game theory, slowly and thoroughly so you really get the concepts. Only then can you begin to study Bitcoin with the requisite background knowledge in order to absorb deeply what it is.

CoinKite’s ColdCard seems the best all-around option at this time.

Do your own research and make up your own mind. Everyone’s a scammer, everyone’s got an angle — but skin in the game still beats out conflict of interest. (h/t N.N. Taleb)