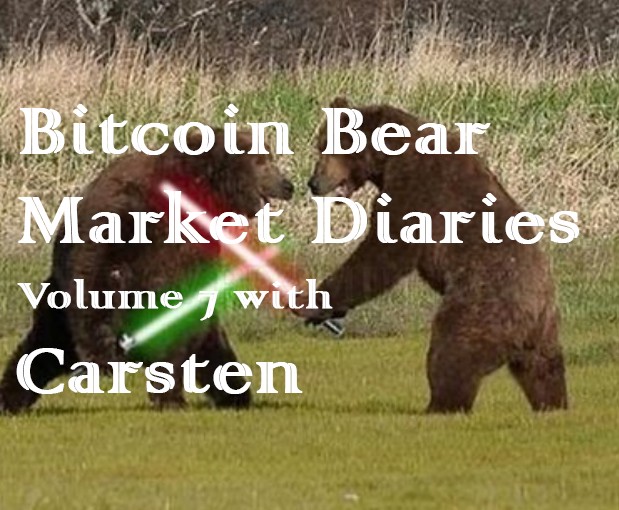 Carsten is one of my favorite types of old school Bitconers who is not here for attention or fame. He likes to lurk in the shadows anonymously and post insightful commentary on twitter. He was hesistant to do this interview, but told him I felt it was important to include his insight and experience in this diary series.

A few people follow my random thoughts on Bitcoin on Twitter @CarstenBKK. I try to keep a low profile and I want to keep my privacy, so I almost never attend Bitcoin meetings.

I don’t remember exactly when I first heard about Bitcoin, but I vididly remember a discussion with some colleages about Adam Back’s hashcash proposal to fight email spam back and how disappointed I was, that it wasn’t widely adopted. So when I heard about Bitcoin and its use of PoW I was ignoring it until I attended 28c3. Afterwards, I played around with the new release 0.5.2.

When I realised, that people really pay money for computer solved puzzles.

Losing friends because they were to impatient to wait for Bitcoin to recover price wise. Be careful when you shill Bitcoin to friends and colleagues.

Bitcoin’s way too high Gini index together with a further splintering of the community along political, personal convictions has the potential to create unrecoverable damage to the ecosystem.

Most forks are just useless attempts to earn a few bucks from people willing to pay for them. Forks are just another type of altcoin. BCH set the trend, but nowadays forks seem to be a thing of the past.

I really enjoy to see the development in the Lightning network community. Both tech development and also early business ideas built on LN will create a new class of applications. The latest announcement from Jack Dorsey that Square will support Lightning is a major accomplishment for the technology and its adoption. The most important aspect of LN is the developer enthusiasm it generates. I expect LN’s developer community to grow larger then Ethereum’s. This will pay of down the line. There are already first prototypes to create a js library to enable ‘web3-alike’ applications on top of LN. I really expect the space to explode.

That I didn’t split all forks and sell them for BTC. I was too busy commenting the takeover attempts of altcoiners on Twitter.

Never trust yourself. I was too optimistic.

It was just a normal market hype cycle. Nothing special triggered it, we just ran out of people willing to buy.

Buyers aren’t back yet. We are still at August 2017 prices.

LN is still in its early days and still has many open issues, but for most of them there are solutions. It’s not yet ready for prime time for millions of people, but it’s already working. LN is reviving the idea, that Bitcoin can become an everyday currency. Future of LN will be the applications built on top of it. I really like to see ideas like RBG protocol implemented, which would allow us to build complex and scalable applications on top of Bitcoin.

I am a hodler by accident, and it was the best financial indecision I ever made. I think human character traits will never change, and Bitcoin is using our weaknesses like greed to grow further. Bitcoin is the first decentralized effective social engineering tool similiar to well established platforms like Facebook, Twitter and others, that also instrumentalize human traits to grow.

Alt-coins are a consequence of Bitcoin’s success and still pose a threat to the overall success of the idea of a completely voluntary currency as they repeatedly showed that it’s possible to sell the dream of having a second chance to become a Bitcoin OG and get rich quick. I really hope to see the collapse of the alt-coin space, but I doubt that it will happen any time soon. Alt-coins try to show that Bitcoin can’t survive, because it doesn’t have the currently hyped feature — like turing completeness, but they forget to mention, that this feature alone doesn’t make a coin a success story.

Do you hold any?

Some of them will recover during the next bull run and new ones will be created by OGs in order to get new people’s money. But I also see a chance that the next bull market will come before the pain of the people who lost money is forgotten and they might warn their peers to stay away from altcoins.

Mostly about startups using advanced Bitcoin features like Hodlhodl, Abbra, Bisq and the financial ‘startups’ of bigger players like Bakkt, Fidelity, ErisX, LedgerX. They show that Bitcoin still has a lot of technical potential and that this potential is recognized by the ‘big guys’.

Most so called crypto influencers just come during the bull markets and try to shill other projects besides Bitcoin for their own profit. Those influencers harm the reputation of Bitcoin and try to legitimize other projects. Huge losses of retailers might lead to a harsh regulation, which also would harm Bitcoin. The space is way too young and can still fail against the established financial institutions. I expect, that some of the influencers will get in serious trouble for promoting unregistered securities. Now some of them are still laughing about the Bitconnect Trevon, but they will stop sooner or later.

Tone Vays get’s it mostly right, when it comes to trading, to the importance of price expectations as a main motivator for new people and to his stance on alt-coins. I really appreciate his consistency. I also appreciate Hasufl’s work, as he tries to understand the non-technical, social aspect of Bitcoin and other coins. It’s important work as it helps us to recognize our own flaws when it comes to further grow Bitcoin.

What’s it going to take for this Bear market to turn around?

A slow sentiment change. The lower we go, the more die hard Bitcoiners keep holding and supply will dry up. BCH friendly OGs will understand that BTC is on track, and they need to stop selling and start buying back into BTC.

Bitcoin will do its thing again. Next bull run will push Bitcoin probably up to $100k. It might be the last with more then 10x.

Be patient and never invest more then you can afford to lose. Have enough reserves to be able to sit out a bear market.

Paper wallet created by Glacier protocol or a hardware wallet. Think about methods to access your funds when you are sick, dead. Casa might be an alternative.

Lately I am impressed by Peter Cormack’s work on What Bitcoin did.

Stay humble while making people curious about Bitcoin. Lead them the right way.