Ben Perrin is a Canadian bitcoiner who hosts the popular podcast BTC Sessions on youtube. Ben has a very consistent and common sense approach to Bitcoin and his show is geared toward helping you understand Bitcoin and cryptocurrency. 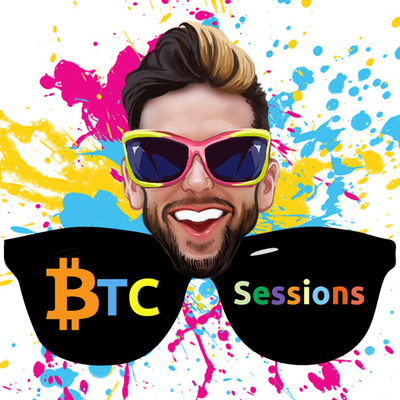 YouTube — BTC Sessions… OR the guy with the stupid hair

I noticed a few times throughout 2013 but didn’t dabble until early 2014 — shortly before the collapse of Mt Gox.

Enduring people calling me an idiot through the bear market of 2014/15/16 to finally be vindicated in 2017.

As time passes I question how much of a threat anyone can pose to Bitcoin anymore. Of course I don’t want to be presumptuous, but I’m more confident now than I have been at any other point in Bitcoin’s history. I suppose the biggest threat would governments colluding to ban it globally — which I believe would only delay the inevitable.

Everyone is convinced they want decentralized governance models until they fall out of consensus… then they claim Bitcoin is either broken or co-opted by the big banks, in turn creating or migrating to their own version of what they think Bitcoin should be. The fact of the matter is that the free market decides what Bitcoin is, and if you’re sitting on a chain with less hash power, lower transaction volume, and non backwards-compatible code, you’re using an altcoin.

There’s tons to be optimistic about! Lightning network development is accelerating at breakneck speed. User friendly tools to preserve your privacy (like coinjoin via Wasabi wallet and whirlpool via Samourai wallet) are being released every day. Schnorr signatures will increase privacy AND help with on-chain optimization. People are experimenting with more complex smart contracts on layer 2 solutions. All this, plus Bitcoin’s baked in monetary policy continues to chug away as the 2020 halving steadily approaches.

On a more personal note, I wish I would have spent more time preparing myself professionally for the mania — getting a website up and running, branding my channel better, learning about SEO, etc. Ah well… I’m much better off now.

I’ve learned that we still have a LONG way to go before we see our dot com style bubble and bust. Plenty of ridiculous ideas are still floating around, and I don’t think we’ve seen anything yet.

Anything and everything Craig Wright has done.

Seriously though — I think that the mania in the final quarter of 2017 was totally unsustainable. People were buying Ripple like hotcakes. I was working OTC when Litecoin hit $350 and people were kicking down the door to buy that shit. Everyone wanted whatever went up the MOST that day. The market needed and deserved this.

I think it did plenty of damage… and I’m glad. Most people that piled in throughout the majority of 2017 had no reason to buy other than “the price keeps going up!”

Anyone that’s still around has had a bigass plate of humble pie, and likely is a more well informed individual because of it.

As I alluded to before, I’m a big fan of everything being done there. Is it a catch-all solution forever? No. Does it have to be? Absolutely not. I think it will vastly improve functionality for low value transactions and microtransactions, and will take the pressure off when fees on the main chain get a little cumbersome. I also think that eventually many users will only ever touch BTC via lightning or other L2 solutions.

I think HODLing — especially right now — is an entirely justifiable thing to do. We live in an age where we are downright encouraged/forced to be good little consumers and spend our income the moment we get paid. Saving is a thing of the past, and debt is smiled upon. Well… there’s now an asset that has the inverse effect. Over time I hope that an age of sound money comes about where people carefully consider their expenditures, while at the same time saving for their futures.

I’m an unapologetic Bitcoin maximalist. This doesn’t come out of closed-mindedness but rather I’ve put together a list of criteria for what I believe makes a great cryptocurrency/sound money. To date I haven’t seen a coin to pass this criteria other than Bitcoin.

I do not — I view any altcoins I’ve held in the past as nothing more than a gamble. Sure it’s fun to roll the dice now and again, but I’m a long-term thinker and I’d hate to risk much of my Bitcoin on impulse.

In the next bull market… I don’t think the last drop will have much of an effect at all. Honestly I anticipate much more stupidity to come before we endure our dot com decimation. In the long run though, I think we’ll see a convergence on the most sound money, which I believe to be Bitcoin. There may be others kicking around, but I think it’s more likely they would be niche use cases that aren’t YET built on top of Bitcoin.

I do indeed believe Bitcoin will become a globally used currency, but I think it will take longer than many proponents are saying. There are a lot of entrenched interests with vast resources at their fingertips who will fight tooth and nail to hold onto the old way of doing things all the way to the bitter end.

I’m excited for anyone building on Bitcoin to be honest. I really like that GAB forked Brave Browser to get rid of the BAT token and replace it with lightning network. Wasabi’s coinjoin wallet is really cool. LEDN is a service that allows users to use BTC as collateral for a loan. There’s a new startup called Ptarmigan experimenting with IoT via lightning. Plenty of interesting stuff popping up everywhere.

Haha oh man, this could get me in trouble. Honestly I don’t think anyone ever gets it 100% wrong or right. One thing I WILL say is that I find channels that have a history of clearly shilling ICOs without disclosing being rewarded really grind my gears.

What “crypto influencers” do you think get it right and why?

This will also probably get me in trouble, but… I really like Peter McCormack and the What Bitcoin Did podcast. Why? He openly says that he’s not an expert and essentially the show is him trying to navigate the space/learn as much as possible while also entertaining an audience. He gets some flack for certain guests that he invites on, but as far as I’ve seen he’s been nothing but transparent.

Quite simply… time. I am a firm believer that this market is more or less driven by the halving. The supply of new coins will be reduced next year (2020), and the market is used to readily absorbing all those coins at the current price. At the time of the halving there is no major difference — all existing liquidity is still available on exchanges. However, that inflation which the market was used to is suddenly reduced, and gradually over time that pinch is felt. Price gradually goes up as it becomes a little harder to get new coins. People who aren’t familiar with BTC’s monetary policy see the price inching up towards its old highs and think “Hey, might be a good time to buy!” BTC continues past old all time highs and the FOMO sets in, spurring on another ridiculous boom/bust. Rinse and repeat until the halving is common knowledge around the globe.

I’ve never been more bullish. The pullback all the way to $3k didn’t come as a surprise to me, and I’ve been stacking sats all through 2019.

Please God spend a LOT of time understanding Bitcoin before trying to wrap your head around any alts people are claiming to be the “next bitcoin”. Learn about the protocol, learn about the conditions that led to Bitcoin being necessary, learn about how the internet scaled, learn about austrian economics, give The Bitcoin Standard a read (or grab the audiobook if you’re not much of a reader). All of this knowledge will be your foundation, and will give you a good litmus test when someone tries to sell you their bags of alts.

NEVER leave it on exchanges. The past decade is littered with the bodies of unprotected hodlers. Start small, practice creating/deleting/recovering a mobile or desktop wallet. Then get yourself some hardware. Nothing is 100% foolproof, but imperfect security is not an excuse for NO security. For something relatively simple, grab a Ledger or Trezor. For something a little more hardcore capable of true cold storage, grab yourself a Coldcard.

Jameson Lopp has put together perhaps the most comprehensive list of Bitcoin knowledge I’ve seen anywhere. If you were to go through all of this I imagine you’d be one of the most well informed individuals in the space.

I still firmly believe that Andreas Antonopoulos is one of the best speakers in the space. His talks are very accessible, and he has some great material for noobs and veterans alike.

Get this book. Read it.

If you want some basic tutorials regarding wallets, apps, proper security, etc, you can check out my channel. I also do daily news.

Your level of investment in an asset should directly reflect your knowledge of that asset. Put in the time now so you’re not rekt later.