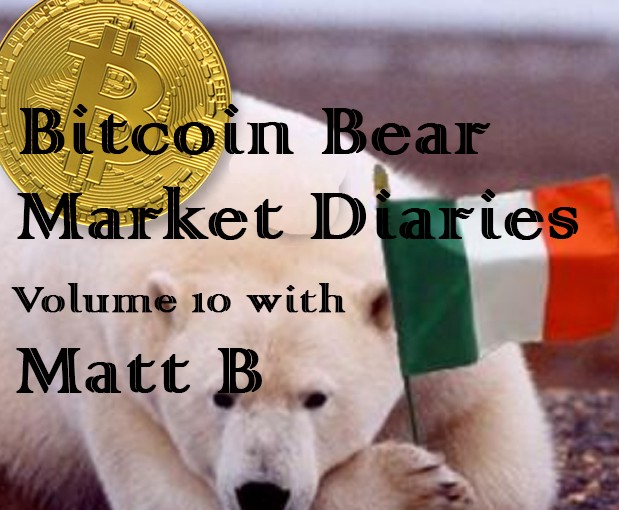 Matt B is an Irish Bitcoin researcher and writer with a law degree. Most likely you have read some of his articles in various publications over the last few years. Matt writes about all cryptocurrencies, but his heart is with Bitcoin which makes his perspective interesting.

Getting a node up and running for the first time and cackling at my newfound financial sovereignty.

Locking myself out of a hardware wallet with no way to recover funds.

In these (relatively early) stages, a state-sponsored attack could set us back considerably. I’d say either that, or people finally waking up to the fact that Dentacoin is a vastly superior system.

The infrastructure cropping up around the Lightning Network and the improvements to privacy on the horizon. Another area that’s come a long way recently that I’m excited about is the use of alternative networks (radio, mesh, satellites) to propagate transactions/blocks without reliance on an internet connection.

Shilling Bitcoin to Uber drivers after a night out.

As cliché as it sounds, that most are in it for the tech. My non-Bitcoin clients are falling off the radar, while everyone I know in Bitcoin seems to be building something or other.

The ‘hash war’ between two altcoins fighting for relevance. That said, it made for great entertainment.

In my opinion, FOMO and ICO mania created a positive feedback loop. I don’t think the masses realised that they were buying into ‘pay-to-play’ databases for the most part, which certainly helped to prop up the valuation of even the most dismal projects.

My friends that wanted to buy in towards the top have now seemingly forgotten about the ‘dead’ Bitcoin project. Evidently, the demand is waning a bit, but I’m noticing an uptick in newcomers on social media — I think that once you understand the value proposition, the price has little effect if you’re investing sensibly and makes sense as a long-term investment.

It’s incredible. I started experimenting with it just under a year ago, and even then the UX left much to be desired. Fast forward to today and you have a myriad of different wallets, plug and play nodes and other improvements that make it all the easier for the less tech-savvy to jump in.

I’m really optimistic about the role BTCPay Server will play, not just in transforming e-commerce but in opening up new monetisation methods for content creators.

If you’re not earning in BTC, it’s probably a wise move if you believe in the long-term viability of the protocol. I make the bulk of my income in it, so I end up cashing out or spending most where I can. I just take from it that saving = good, no matter what you’re saving.

I hope they don’t revoke my maximalist license, because I like privacy coins (though I’m doubtful as to their shelf life). I see very little utility in any others.

I have one or two others, albeit in nominal amounts.

Depends on the coin — some just get abandoned, while others weather the storm. One thing is clear, though, and that’s that they’re all dependent on the Bitcoin price.

Only a matter of time!

I wouldn’t like to name names, but I will say there are far too many that inevitably make their way to my Twitter feed.

To be honest, I don’t understand why Andreas Antonopoulos gets so much flak (even though I don’t particularly care for Ethereum myself). He has been, without question, the most comprehensive source of information on Bitcoin for me.

Aside from him, it’s hard to top the indomitable Pirate Beachbum when it comes to A-grade content!

Some coins are still grossly overvalued, but I’m not sure we’ll see them disappear with this cycle. I think advances in Lightning may be the catalyst to set the bull free this time around.

More so than ever.

Don’t waste time with every ‘Better Bitcoin’ that comes out, don’t invest more than you can afford to use, hold your own keys and read Mastering Bitcoin and The Bitcoin Standard. Join the conversation on Twitter.

Use more than one hardware wallet so as not to keep all your funds in the wrong place — I recommend Ledger, Trezor and ShiftCrypto’s BitBox.

Stephan Livera is absolutely killing it these days and Hasu has some fantastic pieces on Medium. BlockDigest is great, too.

Anything by Kyle Torpey is always top-notch (I’d also recommend following a bot he created, @cryptoretreats, which posts news on privacy and Bitcoin).

When in doubt about OPSEC, just listen to Biggie’s Ten Crack Commandments.