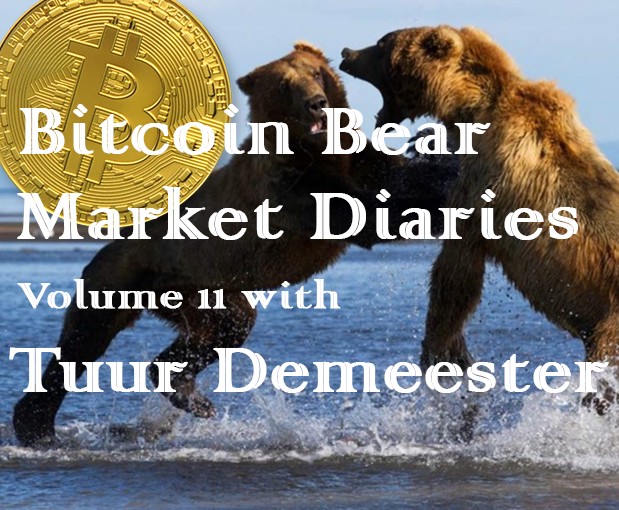 Tuur Demeester is an economist and investor with a background in Austrian economics. He is also founding partner of Adamant Capital and has written in depth market research reports for years.

People usually know me from my tweetstorms, or from my Bitcoin focused research reports.

I first learned about Bitcoin in Buenos Aires in 2011. Started recommending it to my financial newsletter subscribers at close to $5 in early 2012.

To me, the best thing about Bitcoin is the friends you make along the way. Nothing beats unexpectedly meeting an old friend on a Bitcoin conference in a faraway place.

The worst experiences for me have been when I found out that particular people I thought were trustworthy eventually proved themselves not to be.

Also, at times I’ve gotten caught up in the mass psychology of the crowd, who usually is wrong. I give myself a hard time afterwards when that happens, and work to figure out why I gave up my independent perspective.

Complacency. If Bitcoin users as a whole stop caring about decentralization, privacy, protocol robustness, then over time significant vulnerabilities will start building in the ecosystem.

I think they are very healthy for the ecosystem, and if you count all the altcoins that were forked off of Bitcoin, then we’ve had over 1,000 forks so far. Bitcoin forks show people that they are always free to leave if they don’t agree, and do things their own way. There is zero coercion here, zero barriers to entry or exit. Of course it’s painful when people not only want to leave but actively try to attack and boycott the Bitcoin blockchain, but in the long run these attacks are to be expected and only help improve the ecosystem’s immune system.

After being a decade in production, the technology is robust and we have a solid basis to scale out this platform in a modular way. Bitcoin has some of the smartest people I’ve ever met.

Starting too soon with selling. I have a conservative bias, which sometimes makes it hard to grasp the dynamics and full potential range of a market mania.

Patience and a level of detachment is healthy and necessary. Psychological planning for bear cycles pays off great dividends. I’ve learned a lot more about Bitcoin Valuation (here’s our write-up on that topic).

Around the $6,000 level last summer, we felt there was still too much optimism and hope in the market compared to the very weak demand. We put out an opinion piece at the time to warn for lower prices in the second half of the year.

The seeds of Bear markets are sown in the Bull phase, no different here. Around the summer of 2017 we entered a phase of absolute exuberance with great retail participation. It was a true lemon market, with lots of information asymmetry, skewed incentives, low transparency, and a plethora of low quality assets.

We think we’re currently in the capitulation phase. Sentiment among retail is very pessimistic to even apathetic. Many people bought “crypto” as a basket and feel cheated now that so many ICOs seem to be going nowhere — a throwback to the dotcom crash. On the other hand, high net worth individuals and value oriented institutions are now accumulating.

The current state of Lightning is very experimental, with a lot of bugs and currently with relatively high failure rates. But it appears to me that the fundamental architecture is sound. I come to that conclusion because since the ideas were first presented years ago, I haven’t has seen it conceptually falsified, i.e. I haven’t seen convincing, in depth arguments about why a payment channel layer on Bitcoin couldn’t work or why it couldn’t scale. It’s also encouraging that there are different, extensively tested Lightning implementations whose transactions are compatible with each other.

The only way to understand Bitcoin is through HODLing. It’s like how the only way to really understand a smart phone is to switch it on and use it. Bitcoin is digital gold, which naturally invites the investor to hold it for the long term as a store of value.

I think it’s important that there exist alternatives to Bitcoin, though I think the altcoin ecosystem is quite complex and often misunderstood. The existence of altcoins prove the case that we’re really dealing with a free market in startup currencies now. I think Bitcoin will eventually have a market dominance of 80–90%, which leaves quite a bit of room for alternative coins to carve out a niche.

My long term play on altcoins was my Kraken equity investment in 2014 (a crypto exchange), which was a way to get exposure to the whole market. I thought Kraken would do well if at some point retail investors became interested in altcoins, and they did, and it did. I currently hold some Litecoin, and have exposure to Chia Network. Litecoin is a retail darling (though hated in bear markets) that’s been around for over 6 years, and often seen as a hedge against Bitcoin. I hope the coin doesn’t experiment with new features, as I think its appeal is exactly the fact that with exception of its mining algorithm it’s near identical to BTC and thus can systematically import all the battle tested code by the Bitcoin core developers. I like coins that are in close conceptual proximity to Bitcoin, because I think proof-of-work with inflation control is what Satoshi’s big breakthrough was all about. I’m not convinced that proof-of-stake can properly secure a decentralized cryptocurrency protocol.

I expect that many of them, probably over 90%, will become comatose over the next five years. Many people weren’t around then, but in 2013 there also was an altcoin boom. At the time investors thought that national coins would become a thing, and started pumping things like “Spaincoin” and “The Dutch Guilder”. But during the ensuing 2014-’15 bear market, a huge amount of those original altcoins flatlined, meaning that miners, traders, and node operators collectively gave up on them in favor of other altcoins or Bitcoin. Check out https://deadcoins.com to get an idea.

I agree with Daniel Krawisz’ original definition, that hyperbitcoinization is “Bitcoin induced demonetization”. I think if Bitcoin can retain its properties of decentralization, censorship resistance and inflation control, it has a good shot at inducing bitcoinization around the world in the next several decades.

I like many startups in the space, the pace of innovation is quite staggering. To name a few names: Blockstream, Kraken, Trezor, Unchained Capital, Casa, Bitrefill, Zap, Lightning Labs, HodlHodl.

I often have quarrels with Vitalik Buterin, usually because I disagree with a premise behind his arguments.

In my experience, work and integrity have compounding effects over time. When I hear people like Adam Back, Pieter Wuille, Gregory Maxwell, Andrew Poelstra, Bryan Bishop, or Tamas Blummer sharing an opinion or making an argument, I always take a moment to pause and listen.

Enough accumulation by value investors will lead to rising prices, which will eventually catch the attention of the retail public.

How bullish are you on Bitcoin despite this recent pullback.

It’s hard to give out general tips, but I think the credo “don’t trust, verify” has served me well so far.

I’d say google “multi sig wallet” and buy a Trezor hardware wallet. Try to be thorough in your research but avoid making things too complex. It’s very likely that most coins so far have been lost simply by people forgetting their passwords.

To me Twitter works great as a big aggregators of information, so I follow individuals there and see what they link to. For some reason I don’t consume a lot of crypto podcasts for the moment — I think it’s that I’m immersed in Bitcoin all day already, so I prefer to use podcasts and audiobooks to broaden my horizon beyond Bitcoin.

I’ll just repeat my pinned tweet here: “Bitcoin is digital gold in the eyes of a growing subset of the population. To some extent this group already operates on a Bitcoin Standard: investments are evaluated on their ability to yield a return in Bitcoin.”