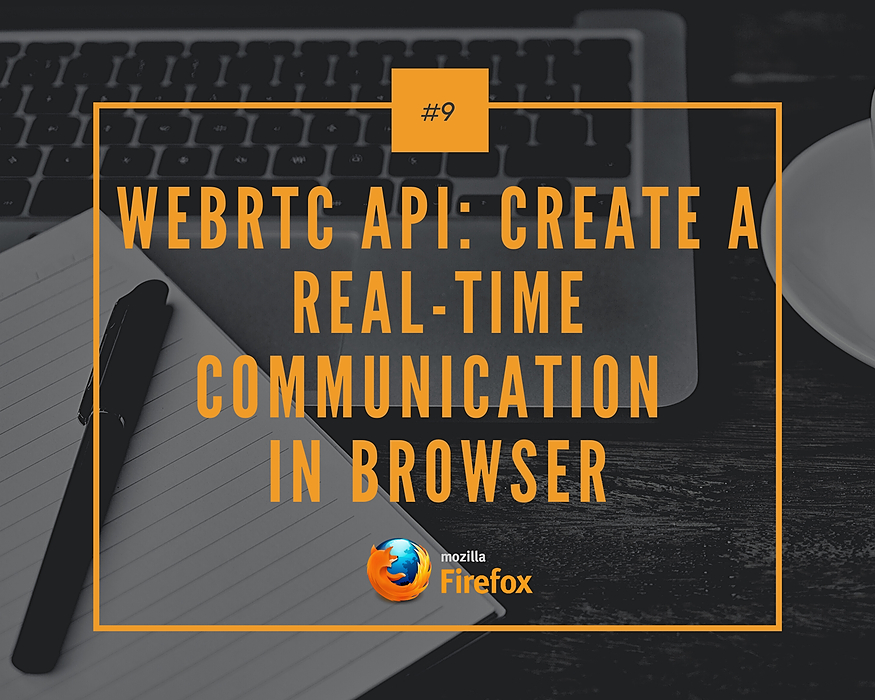 WebRTC (Web Real-Time Communication) is a technology which enables Web applications and sites to capture and optionally stream audio and/or video media, as well as to exchange arbitrary data between browsers without requiring an intermediary. The set of standards that comprise WebRTC makes it possible to share data and perform teleconferencing peer-to-peer, without requiring that the user installs plug-ins or any other
third-party software.

WebRTC consists of several interrelated APIs and protocols which work together to achieve this. The documentation you'll find here will help you understand the fundamentals of WebRTC, how to set up and use both
data and media connections, and more.

Because implementations of WebRTC are still evolving, and because each browser has different levels of support for codecs and WebRTC features, you should strongly consider making use of the Adapter.js library provided by Google before you begin to write your code.

Adapter.js uses shims and polyfills to smooth over the differences among the WebRTC implementations across the environments supporting it.

Adapter.js also handles prefixes and other naming differences to make the entire WebRTC development process easier, with more broadly compatible results. The library is also available as an NPM package.

Connections between two peers are represented by the

interface. Once a connection has been established and opened using , media streams (s) and/or data channels (RTCDataChannels) can be added to the connection.

Media streams can consist of any number of tracks of media information; tracks, which are represented by objects based on the

interface, may contain one of a number of types of media data, including audio, video, and text (such as subtitles or even chapter names).

Most streams consist of at least one audio track and likely also a video track, and can be used to send and receive both live media or stored media information (such as a streamed movie).

interface. This can be used for back-channel information, metadata exchange, game status packets, file transfers, or even as a primary channel for data transfer.

more details and links to relevant guides and tutorials needed

Because WebRTC provides interfaces that work together to accomplish a variety of tasks, we have divided up the interfaces in the list below by category. Please see the sidebar for an alphabetical list.

Represents a WebRTC connection between the local computer and a
remote peer. It is used to handle efficient streaming of data between
the two peers.

Represents a bi-directional data channel between two peers of a connection.

Represents events that occur while attaching a

to a . The only event sent with this interface is .

Represents the parameters of a session. Each

consists of a description indicating which part of the offer/answer negotiation process it describes and of the SDP descriptor of the session.

The RTCSessionDescriptionCallback is passed into the

object when requesting it to create offers or answers.

Provides information detailing statistics for a connection or for an individual track on the connection; the report can be obtained by calling

. Details about using WebRTC statistics can be found in WebRTC Statistics API.

Represents information about an ICE transport.

Defines how to connect to a single ICE server (such as a STUN or TURN server).

Represents events that occur in relation to ICE candidates with the target, usually an

Manages the encoding and transmission of data for a

Manages the reception and decoding of data for a

Contains information about a given contributing source (CSRC) including the most recent time a packet that the source contributed was played out.

The interface used to represent a

event, which indicates that an object was added to the object, indicating that a new incoming was created and added to the .

Used to provide configuration options for an

Indicates the state of an

The WebRTC API includes a number of interfaces which are used  to manage security and identity.
Enables a user agent is able to request that an identity assertion be generated or validated.

Represents the identity of the remote peer of the current connection. If no peer has yet been set and verified this interface returns null. Once set it can't be changed.

Represents an identity assertion generated by an identity provider (idP). This is usually for an

. The only event sent with this type is .

Represents an error associated with the identity provider (idP). This is usually for an

. Two events are sent with this type: and .

Represents a certificate that an

These interfaces are related to interactivity with Public-Switched Telephone Networks (PTSNs).

This article introduces the protocols on top of which the WebRTC API is built.

A guide to how WebRTC connections work and how the various protocols and interfaces can be used together to build powerful communication apps.

Lifetime of a WebRTC session

WebRTC lets you build peer-to-peer communication of arbitrary data, audio, or video—or any combination thereof—into a browser application.
In this article, we'll look at the lifetime of a WebRTC session, from
establishing the connection all the way through closing the connection
when it's no longer needed.

Perfect negotiation is a design pattern which is recommended for your signaling process to follow, which provides transparency in negotiation while allowing both sides to be either the offerer or the answerer, without significant coding needed to differentiate the two.

A tutorial and example which turns a WebSocket-based chat system
created for a previous example and adds support for opening video calls
among participants. The chat server's WebSocket connection is used for
WebRTC signaling.

A guide to the codecs which WebRTC requires browsers to support as
well as the optional ones supported by various popular browsers.
Included is a guide to help you choose the best codecs for your needs.

interface. This guide shows how to do so.

The WebRTC organization provides on GitHub the WebRTC adapter to work around compatibility issues in different browsers' WebRTC implementations.

The adapter is a JavaScript shim which lets your code to be written to the specification so that it will "just work" in all browsers with WebRTC support.

This article shows how to use WebRTC to access the camera on a computer or mobile phone with WebRTC support and take a photo with it.

interface is a feature which lets you open a channel between two peers over which you may send and receive arbitrary data. The API is intentionally similar to the WebSocket API, so that the same programming model can be used for each.

In additions to these specifications defining the API needed to use WebRTC, there are several protocols, listed under resources.