Is the Lottery a Waste of Your Money?

Lotteries can be traced back for centuries, and in some of the earliest cases the purpose of the lottery was to raise funds for some sort of community project. Of course, simple math dictates that if the lottery was designed to raise funds, that means that the total amount of the money being given away as a prize had to be less than the total raised. Queen Elizabeth I, for instance, ran a lottery to raise funds for the “reparation of the havens and strength of the Realme, and towards such other publique good workes.”

Over time, lotteries became more popular. They helped fund the first permanent English settlement in the United States, and they are still used by many states in the US to raise funds. But from a player’s perspective, are they worth it? And if a standard lottery is worth it, could there be better options that increase not only the total award for players, but also ways to ensure no one is being scammed along the way? Lotteries handle big, big money, so isn’t it time we started keeping a closer eye on the whole business?

Traditional lotteries are run all over the world by countries, states, cities, and more. These lotteries are most often used to fund projects that the lottery agency wants to complete; whether that project will benefit the public or not is up for debate. There are many different lotteries that people can play, and they all share one thing in common: odds.

Odds are a funny thing. If you are playing a lottery where a certain number of tickets are sold, and one of those tickets will win for sure, your odds are based on the number of tickets sold. But modern lotteries have realized that there is a far more profitable method (profitable for them at least).

Take, for example, one of the standard lottery games that is played worldwide: 6/49. In this game, the player chooses 6 numbers out of 49 numbers (typically 1-49), and the numbers are then typically drawn out of a machine that contains balls with the corresponding numbers printed on them. Seems easy, right?

Well, there are a few things working against you here. First, statistics. The odds of choosing the correct six numbers (and these don’t even have to be in the correct order most of the time) is 1 in 13,983,816. Let’s give that number some perspective based on data for US citizens:

Have you ever thought to yourself “I have a good chance of dying from sunstroke?” Didn’t think so. Odds are funny, and when our emotions get involved we tend to skew them to make ourselves feel better. But by that logic, buying traditional lottery tickets (especially in the 6/49 game) should give us more fear of the sun than hope for winning.

That isn’t to say that people don’t win. People win all the time, even more so when they cheat. Eddie Tipton for example, a lottery employee, hijacked a few lotteries by altering their algorithms. He ended up raking in over $24 million dollars before he was eventually caught.

Even when you aren’t competing against cheaters you aren't winning 100% of the money. In the United States, only about 63% of the money made through the lottery is paid out in winnings, while 6% is eaten up by administration fees. The other ~30% goes to whatever the states decide, dividing it up between various programs as they see fit. 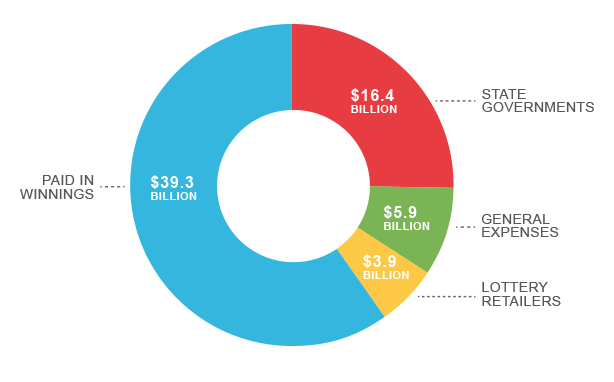 High fees eat into lottery profits, the uncertainty of people cheating the lottery system, and costly operations. So, the most obvious solution here is the blockchain, right?

“Blockchain Fixes Everything” – Every blockchain writer ever

After lotteries made their way online, the world of scams became ever more rampant. Online lotteries are even more fishy than online casinos, since the regulating bodies are even fewer and far in between. A majority of online lotteries are simply physical lotteries that have online access points (which you have to fulfill certain geographical and age restrictions to compete in), while others have a bit more of a Wild West approach. LotteryExposed has been tracking fraudulent lotteries since 2012 and has racked up quite an impressive list of online scams.

As you’d expect, companies have easily put together that the blockchain, an immutable and easily verifiable technology, should go hand in hand with the lottery to ensure everyone is playing fair. Companies like Quanta and Fire Lotto are working hard to revolutionize the space by using the blockchain to monitor their lotteries, arrange for payments, and ensure that everything is trackable and fair. These companies address the problems of the lottery in a few key ways.

First, they address the problem of fraud by running the RNG through a hash that is based on a blockchain; this takes care of cheaters since the number is verifiably random.

Second, they give out more in winnings since they have far lower administrative and operational fees than traditional lotteries. For instance, both Quanta and Fire Lotto award lottery prizes containing 70% of the money raised through ticket sales.

Wait, that isn’t much better than the 63% that US lotteries offer on average. But, at least since they offer the ability for users to pay with cryptocurrency they are open to users around the world. Also, since these companies launched their own coins during their ICOs they give players a chance to reinvest their winnings back into the lottery in an effort to win more money before withdrawing, right? Well, technically yes, but it wouldn’t have been the best plan. When looking at total ROIs for each of these coins: FireLotto (-93.36%), Quanta (-51.72%).

YOUnited is taking this approach, and time will tell if we’ll be seeing their total ROI in red or black. Their approach is a bit more unique than just slapping the blockchain solution onto an existing problem, instead they are actually trying to revolutionize the space by simply making their blockchain the rule enforcer for both lotteries and casinos. It is simple, really, and may work out brilliantly so long as they can keep the ball rolling.

Their approach isn’t to charge an exorbitant fee for each lottery (honestly, taking 30% of the total winnings in a blockchain lottery is absurd), instead they will charge a 1% smart contract execution fee that is applied only post-game to the winnings, and a small (0.1%) transfer fee on their blockchain. Most of that 1% fee goes back into the YOUnited economy, which helps cover incentive programs that they run to entice new players to their games. We have constant examples in the blockchain world where a company tries to take too much, too fast, with too little regard for the community they serve. They seem to see the potential for long-term growth with their community and is working to create a sustainable community that will earn them smaller profits, but these profits will continue over a far longer period of time than companies that charge high fees and burn out fast. YOUnited definitely has better odds of success than Quanta and FireLotto, if only because they are looking to earn a steady income stream instead of striking it rich in one swift move.

Nevertheless, lotteries are a gamble, literally, and whether they are a waste of money is up to each individual person to decide for themselves. With a traditional lottery you are faced with absurd odds, long payout times, and a huge cut out of your winnings for taxes, fees, and more. Blockchain lotteries, however, can definitely fix these issues, but as with any type of gambling, be sure to research your options before diving in. Gamble safe, dear reader, and have fun out there.