How Crypto Charities and Businesses are Helping Venezuelans Beat Hyperinflation 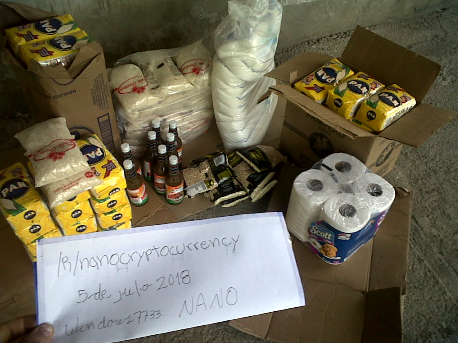 Demand for Bitcoin continues to rise in Venezuela, with trading volumes in October 2018 reaching a record high of 853 million bolivars. This trend isn’t new; Bitcoin trading in the Latin American country has been steadily growing since mid-2017. Cryptocurrency exchanges like CoinCola provide a fast and secure way for local citizens to buy Bitcoin, Dash and other altcoins.

What has caused this surge in crypto trading? The Venezuelan economy has been severely impacted by the bolivar’s drastic inflation, which the IMF estimates may reach a million percent by the end of 2018. With many Venezuelans now unable to afford food and medicine, local citizens are looking for an alternative means of exchange. Cryptocurrencies offer a relatively more stable store of value and provide a more efficient way to make remittance payments.

International charities and businesses have also been doing their part to help Venezuelans survive the country’s economic crisis. Here’s how.

Several movements and groups are helping Venezuelans get the money they need to buy necessities by sending crypto.

Nano is a cryptocurrency that touts instant and zero-fee transactions. In one story, members of Nano’s Reddit community gave a Venezuelan user 230 Nano tokens; roughly equivalent to $500 (as of this writing). The user, who goes by the tag Windows7733, used some of this money — 29 Nano — to buy 102 kilograms of food for himself and his community.

This started out as a one-off story, but Windows7733 has since expanded his efforts to help reach more Venezuelan families. Meanwhile, other people are forming groups to send Bitcoin and altcoins to the country. One of these is called eatBCH.

eatBCH
eatBCH is a non-profit organisation that takes Bitcoin Cash donations to fund food, drink and medicine purchases for those in need.

Venezuela is one of eatBCH’s key target countries. The group has a special channel dedicated to Venezuela, where they regularly post images of locals getting various necessities paid for by donations.

What’s notable about eatBCH is that they try to help those most in need. The Venezuelan division delivers food to a nursing homes every Saturday, and puts an emphasis on helping families, mothers, elderly and children in need.

eatBCH and the Nano community aren’t the only ones helping Venezuelans through their economic crisis. Software engineer Jonathan Wheeler is working hard to get non-profit foundation Pale Blue Foundation (PBF) off the ground. PBF is working on a Lightning Network-ready app that will be used to facilitate Bitcoin donations.

Jonathan himself left Goldman Sachs to focus on the foundation, which shows how serious he is — and speaks to the caliber of people getting involved in helping locals. The hope is that in the near future, PBF can offer a more controlled, systematic charitable solution.

These efforts are helpful and heart-warming. Unfortunately, they are unlikely to offer a permanent solution to Venezuela’s hyperinflation. But not all hope is lost.

As mentioned above, the bolivar’s inflation might reach a rate of 1,000,000% this year. As such, most cryptocurrencies — even in a bear market — are significantly better at maintaining value than Venezuela’s national currency.

This means that using crypto over fiat money can help Venezuelans avoid hyperinflation. Locals are aware of this fact. A growing number of stores and brands — including Subway and Calvin Klein — are now accepting cryptocurrency for payments.

Meanwhile, crypto organizations from outside Venezuela are helping onboard local Venezuelan citizens into the crypto economy with a combination of outreach efforts and attractive offers.

CoinCola is also offering Venezuelans a generous referral program, wherein users get 50% of their referrals’ trading fees; significantly more than 30% for the rest of the world.

Between this and an increasing number of merchants willing to accept crypto, it’s becoming easier and easier to beat hyperinflation.

What’s Next for Venezuela?

As of right now, the future of the bolivar and the Venezuelan economy remain unclear.

The public sale of the Petro — the Venezuela’s state-backed cryptocurrency — is set to commence on November 5, 2018. Despite the launch of the Petro, trading volumes for Bitcoin continue to reach record level highs.

Amid economic crisis, cryptocurrencies provide a measure of relief for Venezuelan citizens, either as an alternative store of value or as a means to drive alternative monetary policies.