People love news. Which is why in crypto, product updates almost always drive the price up. But with over 5,000 projects already on the open market, how can you stay both informed and sane while sorting through the volume of articles, news blips, and tweets published every single day? Even if you had the capacity to capture them all, how do you know which ones really matter?

Welcome to “Crypto Weekly” We are here to make it easy for you to always be aware of the most important crypto-news every week!

If you have a project and want your news to be explained, contact me on telegram: @ksshilov

If you want to know why these updates might have the highest impact in the near future, check out our short “why this matters” opinion section below:

Three large crypto exchanges moved 41.6 million XRP between one another

How are these transactions affecting the XRP token?

Thanks to Bithomp, we’ve already identified the three exchanges: Binance, Huobi, and Bithumb. Why are they moving such massive amounts between each other? We don’t know yet — but we have ideas.

The most obvious reason would be to create fake volume (that’s just speculation, we don’t have any concrete evidence of it). But…

Now, knowing that the biggest transactions are just tokens moving from one exchange to another, this makes sense. More importantly, it reveals the state of the Ripple company, which last year in October was proudly reporting 168 customers comprised of 118 banks.

It might sound like good news if you don’t take into account that one year before that the number of banks was almost the same: out of their 118 partnered banks, more than 100 signed up in 2018.

And why most traders were expecting a price increase for Bitcoin?

First, everyone got this alert from Whale Alert: 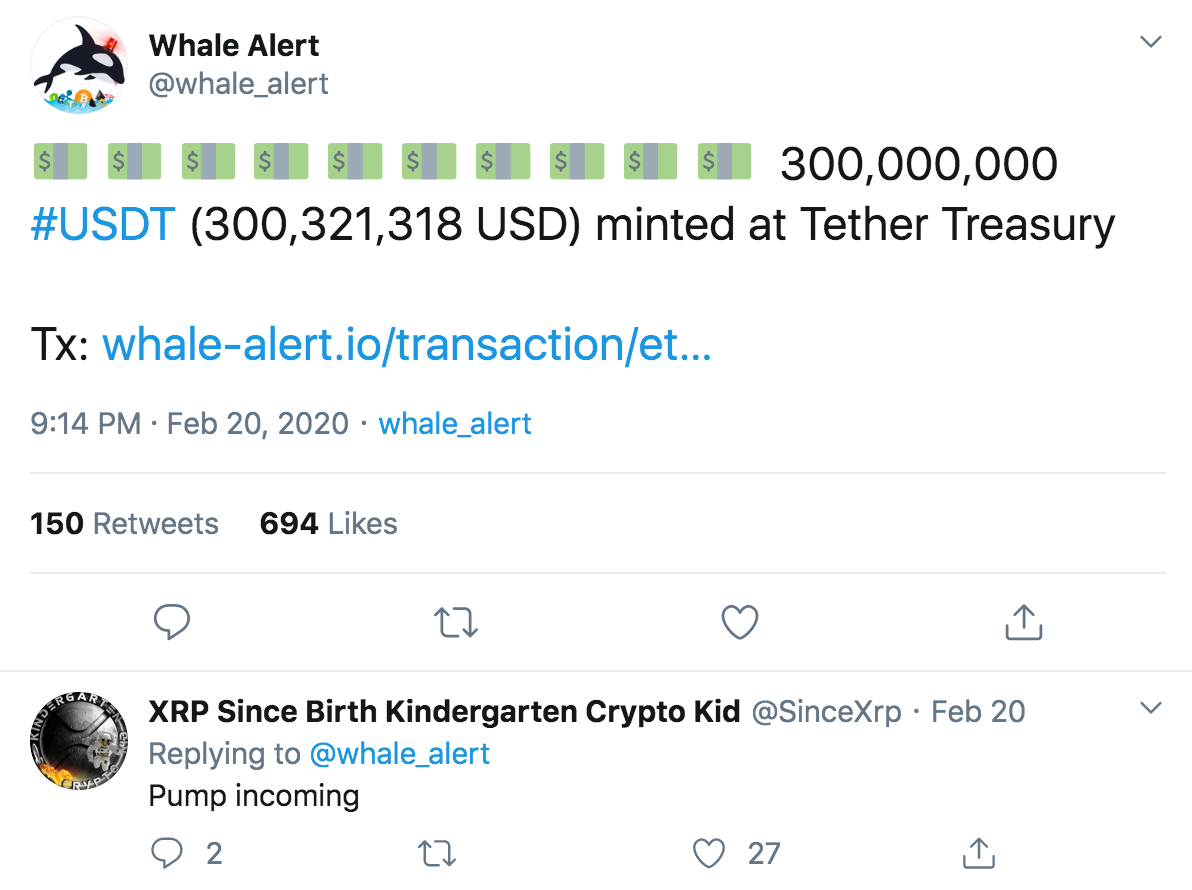 This means that 300 million USDT tokens were just created.

In the past, USDT was considered a factor in Bitcoin price movements.

It works like this: the Tether company is creating USDT backed by US dollars and usually the owners of the newly minted tokens were using them to buy BTC, driving its price up. If you were fast enough to react to such an alert and buy-in before this happened, you could make a quick profitable trade.

However, this is not always true. USDT tokens are not only created based on a USD deposit. New tokens are also created in the case of a token swap (which was the case here).

For its own reasons, the Tether company decided to swap 300 million tokens from the TRON network to the Ethereum network. In this case, it had to create 300 million new ETH-USDT (as seen above) and, with the help of a third-party burn the same amount of TRON-USDT.

As a result, the USDT market cap remained the same, its price the same, and Bitcoin wasn’t even involved in this story! It’s important to have the right knowledge when you decide to make a decision based on this kind of news.

Is this update making EOS a relevant competitor in the dApp market?

On one side, the dApp market has shown healthy growth since May-2019 with a pretty stable amount of active projects. 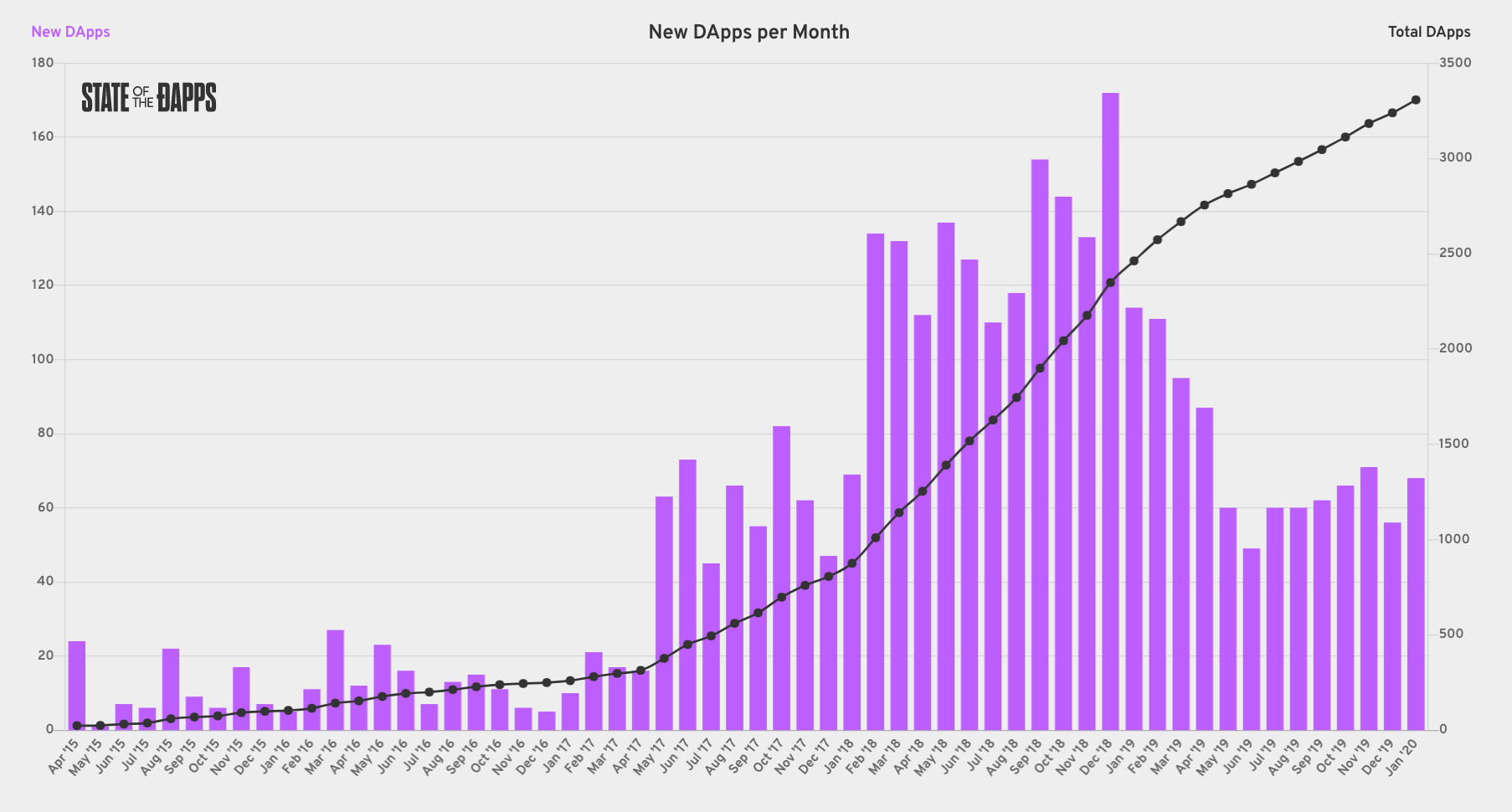 On the other side, it’s currently dominated by Ethereum because it had the first-mover advantage. The surge in salaries for blockchain developers attracted plenty of new talent at the time, and now it continually snowballs on that early success.

However, the overall development of the Ethereum network slowed down dramatically in the past years. It’s true that Vitalik Butterin surfaced recently revealing a new roadmap, but the fix for its scalability issues that are keeping most of the use cases (especially DeFi apps) away won’t be released until later this year (and only for tests). We are looking at more than one full year of waiting without even knowing if the final result will be up to developers’ expectations.

That’s why, while EOS’s current development ecosystem is not even near Ethereum’s, it is the market’s second favorite. With continuous updates, it could rapidly take developers from the leader.

It seems like most of the requirements for building a successful dApp from the ground up are fulfilled. Could EOS become the market leader for dApp development in the near future?

Will real-time dApps soon be possible?

While we know that Polkadot is set to become the first protocol with a scalable sharded chain solution (which could open up the way to the cross-chain interoperability of applications) now we’re getting a new first: oracles.

Blockchain-based smart contracts are by default limited to the data inside the “chain.” That’s where oracles come in, giving smart contracts access to real-world data by fetching inputs from outside the blockchain (exactly like an API). Polkadot gained access to this technology by partnering with Chainlink.

This is not the first partnership for Polkadot, as they are already collaborating with Celer Network for a layer two scaling solution. Celer works like the Lightning Network but can be used for any type of blockchain.

Add these to Polkadot’s “parachain” technology, which acts as a bridge between different blockchains, and we can already theorize use cases such as:

The majority of mainstream users are not technologically savvy, and they don’t appreciate the benefits of handling their own wallets.

For a while, crypto-exchanges seem like the best choice for a casual user:

There are many other risks that come with these perks (let’s not forget about Mt.Gox), but let’s face it, most people would lose their private keys to hackers way before such an event repeats itself.

Nonetheless, exchanges still require KYC verification (if it doesn’t, something might be sketchy) and the interfaces of the most popular platforms are overwhelming for most individuals who are not into trading or not tech-savvy enough.

That’s where solutions in the form of a simple mobile apps came into play, by being able to offer an easy-to-use straightforward way for ANYONE to be able to acquire some crypto.

Square’s Cash App is one of these easy to use products. When the market was stalling (and Bitcoin traders lost interest and exchange volumes were low), Square reported $178 million in bitcoin purchases during Q4 2019. This amount was up over 240% YTD at the time, bringing the Square’s total crypto sales to $517 million in 2019! 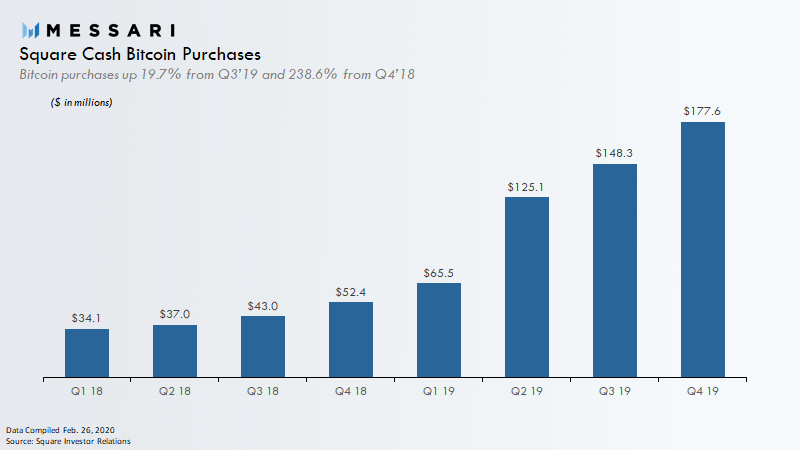 Were you aware of all this money pouring into crypto? It seems that’s where mainstream users prefer to buy their digital currencies.

These are the product updates that got our attention in the past week. They are not hot news now, but most often when news hits mainstream it’s already too late to make a move. We prefer to think ahead of the masses and prepare ourselves with the best knowledge in anticipation of the most likely outcomes.

Next, we’ll keep an eye on the following key points:

And, of course, the product updates in the upcoming week. See you next week with a new summary! Let us know in the comments if anything else caught your attention. We might give our own interpretation of it during next week’s summary.

If you have a project and want your news to be explained, just contact me on telegram: @ksshilov