A recent report released by Bitwise exposed how reported trading volumes and market caps on various crypto exchanges were false. Mentioned heavily on the report was CoinMarketCap as it is the reference of choice for most people seeking to enter or actively participating in the crypto market. 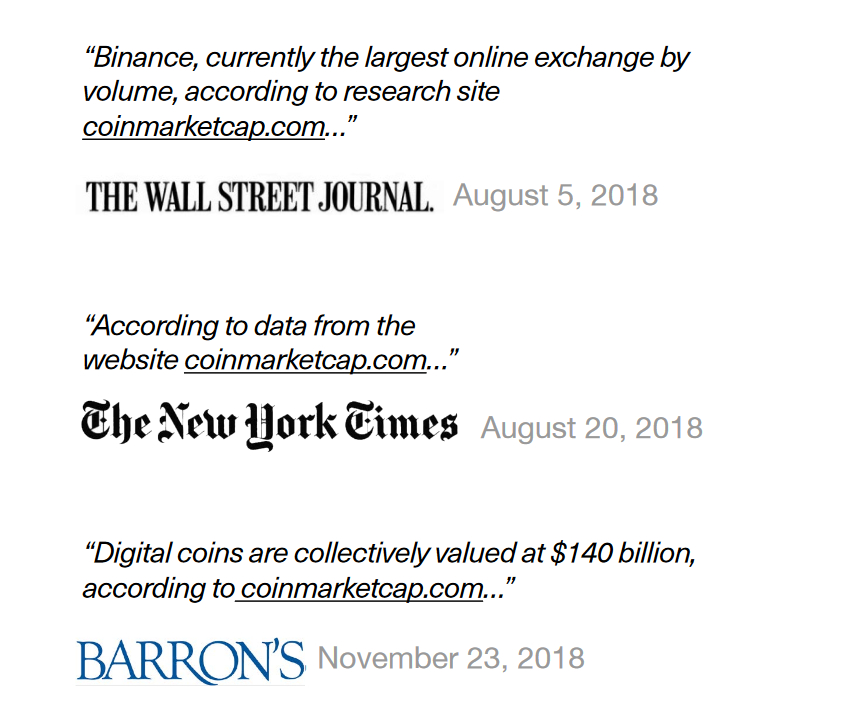 CoinMarketCap responded to the report by confirming that indeed, some of the data hosted on its platform was inaccurate.

However, it seems as though CoinMarketCap is not 100% truthful about their data inaccuracies.

In a news report by Forbes, CoinMarketCap appears to have done very little about its data inaccuracies even after the report by Bitwise. Further, after admitting that there are inaccuracies in some of the data they posted, CoinMarketCap failed to adequately address the issue despite promising to make the necessary changes. 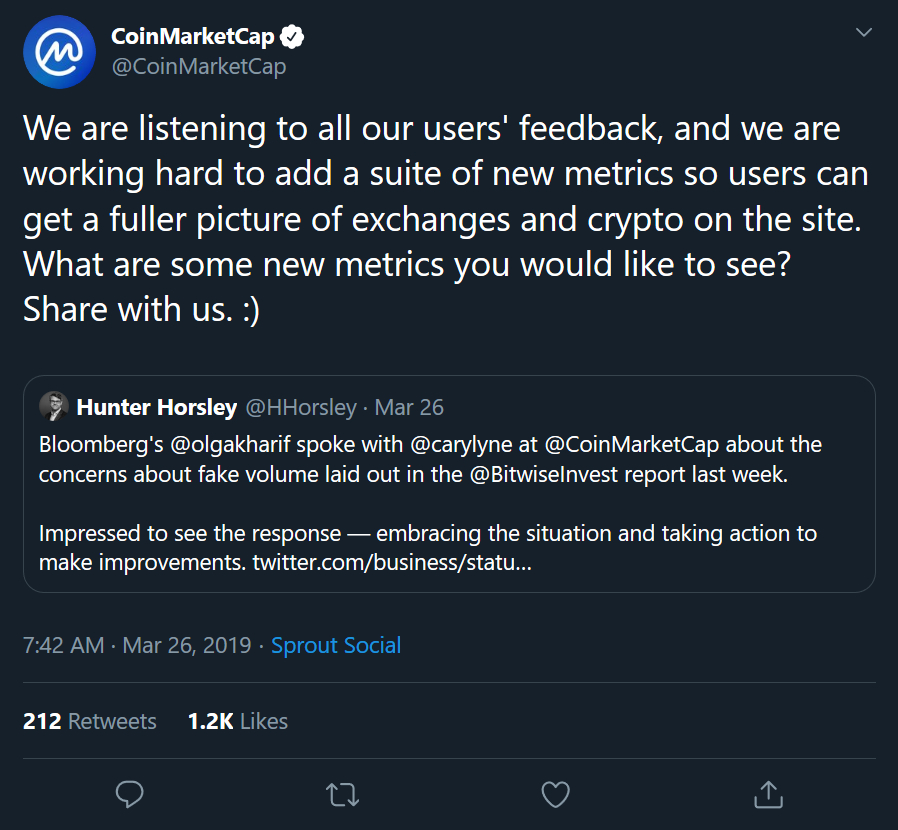 CoinMarketCap promising to change its metrics system is an indicator that the platform is aware of the fake data they are fed | Source: Twitter

The report on Bitwise focused on the inaccuracies in Bitcoin trading. However, the report also highlighted how the same could be done for other cryptocurrencies.

Coindesk reports that for a mere $15,000, a token could end up getting listed on CoinMarketCap. Through applications such as Gotbit, trading volumes can be easily inflated, thus leading to inaccurate results being posted on crypto exchanges. Exchanges are aware of such practices in the market; however, they choose not to do anything as seen in the case of CoinMarketCap.

Gotbit isn’t the only platform practicing market manipulation; there are many more that are quiet about their silent influence in crypto exchanges.

You would think that knowing this, CMC would put measures in place to obtain the correct data. Operations haven’t changed in the market capitalization platform. Erroneous data is still being peddled.

Platforms such as CoinMarketCap thrive when they list coins with artificially low circulating supply which are then traded frequently with an enticing market cap. It is therefore in their interest to list coins that appear to be performing in the market, or at the least, appear to be having a large market cap.

Therefore, it wouldn’t be a surprise if CoinMarketCap allows such practices to be conducted in platforms whose products are listed on their website.

The problem with the pumping schemes accepted by CoinMarketCap, apart from the practice being totally unethical, is the fact that it always ends up hurting genuine cryptocurrencies that are climbing through the ranks.

Consider MXC, an IoT token based in Berlin, Germany. The platform recently unlocked investor tokens, meaning that the initial tokens bought during private sales could now be sold. MXC also offered an early unlock for some private sales participants in exchange for a 20% burn.

These moves would likely improve MXC’s marketcap, which would enhance its position on the CoinMarketCap rankings.

What is even more disheartening is the fact that CoinMarketCap failed to update their data and records even after MXC reached out to them.

CoinMarketCap is well aware of the unethical practices that take place in some of the projects they list. However, they choose to remain silent on this issue and pretend as though everything is fine.

Various cases on unethical practices have been highlighted concerning some of the projects listed, especially the smaller ones. Coinmarketcap has failed to address these concerns.

Because CoinMarketCap ranks projects based on the marketcap, tokens are having a field day manipulating their marketcap to increase their ranking on Coinbase.

The latest manipulation concerns a Chinese based token, ‘L’ which propelled itself to the top 100 rankings based on marketcap on CoinMarketCap. The company has a minimal circulating supply compared to its total market supply. The reason behind this is the refusal by the platform to unlock tokens locked during the investor and private sale. Now the foundation/token team cannot remove the lock because they know a dump would be forthcoming.

Fun fact: In regards to ‘L’, because they lost the faith of crypto investors, now they’re marketing to Chinese elderly women. And in China, people say “once elderly women get involved in business, it means the business is a done mess.”

As per the example above, CoinMarketCap is almost certainly to have similar stories. As CMC is a platform, projects would be paying using tokens to get listed on the exchange, or they may be using trading bots to inflate their token activity. The ability to manipulate this practice for nefarious means is obvious, yet CMC steadfastly refuse to change this procedure. Many projects will also be manipulating their marketcap through extended lock-ups.

Investors Are Often The Biggest Losers

When asked for comment on the discrepancy, MXC replied, “We have continually reached out to CMC to update our supply statistics and thereby increase our ranking. To this day we have not reached any replies from them and our details on CMC continue to be unchanged.”

Investors require accurate data for them to make any sound investments. The inaccurate data that is fed to them by Coinmarketcap translates to poor investment choices.

Investors end up pouring their hard-earned cash into worthless projects that have been inflated by trading bots and faulty platform metrics. Most investors take CMC as the primary source of information. CMC often says:

but most investors already make up majority of their investment decisions before visiting the coin’s website. Then they just make sure it exists and looks legit before closing the website and moving on to an exchange.

According to a post on Medium, investors may be pawns in a much larger scheme involving backroom deals between CoinMarketCap and tokens.

Investors here also mean developers such as the team behind MXC who invested their time and money developing a working blockchain solution only for them to be run down by backroom deals and trading bots.

Platforms like MXC are suffering from false representation while others thrive in the top 100 CoinMarketCap list without having any viable product or service. It is disheartening to be outranked by tokens pumped by trading bots in some underground office.

In many of the links provided in this article, CoinMarketCap agrees that they are aware of some of the irregularities in the data they are fed. In some instances, they even promise to resolve the issue.

Despite the promises, the platform operations remain largely the same.

CoinMarketCap risks losing the trust it had previously gained. The market can be very unforgiving, especially when taken for granted.

For this reason, the following need to be made clear:

I believe by publicly answering these questions, CoinMarketCap would have made a step towards mending bridges that are quickly being consumed by their lies and lack of clarity.