Building Bitcoin: Interview with Vortex, the Founder of ‘Programming with Bitcoin’ and ‘The… 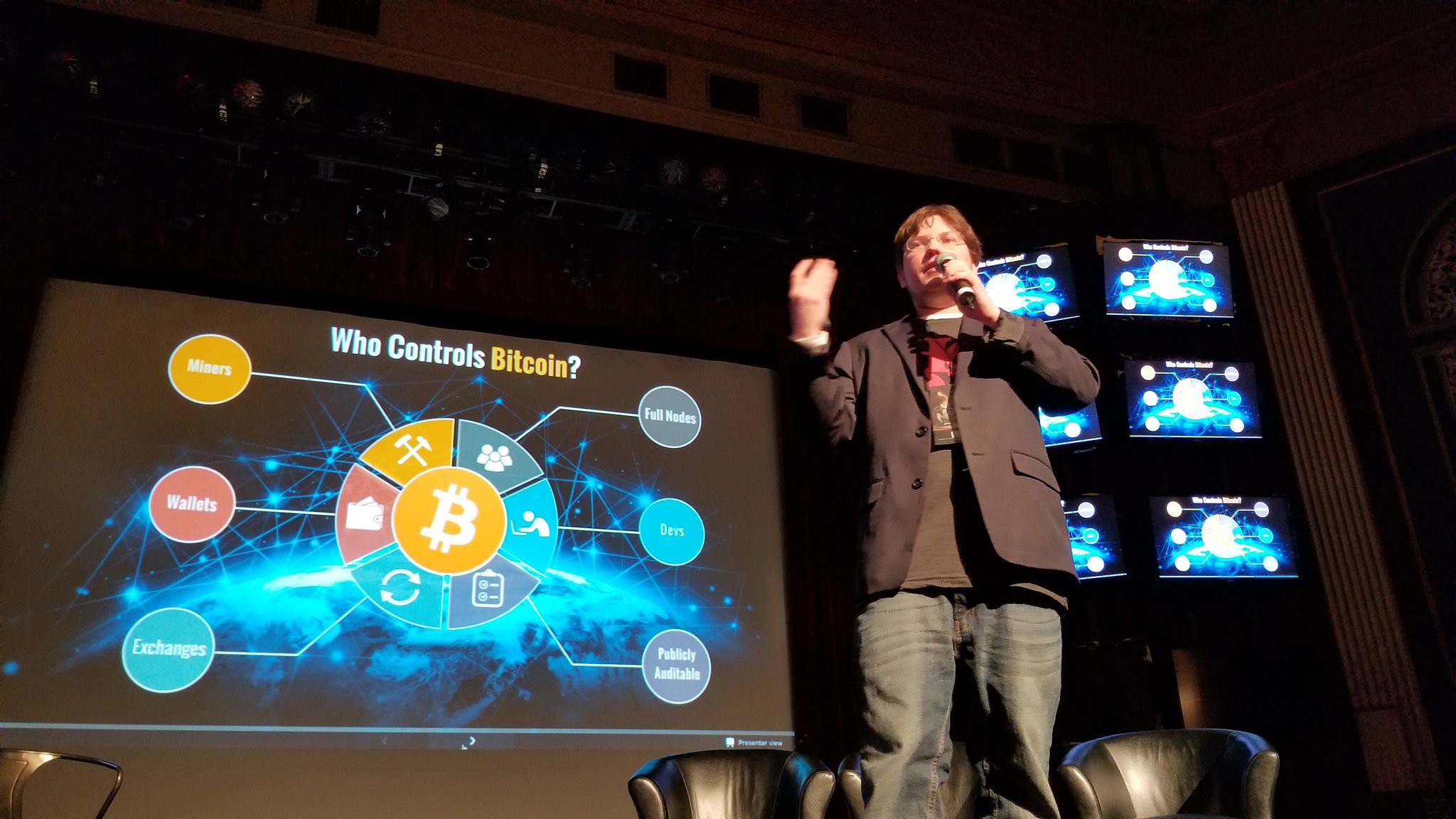 I met Vortex almost two years ago through the Bitcoin world. Many of you know him from his popular podcast, “The Bitcoin News Show.” Vortex is one of those guys whose sole mission is to help educate the world about Bitcoin and has spent countless hours helping to grow the Bitcoin community.

In the last year I have watched him evolve from doing almost ninety Bitcoin podcasts to launching The Crypto Cast Network that features several Bitcoin related podcasts. On top of that he recently introduced a new developer class, Programming With Bitcoin, to teach people how to program with Bitcoin using NBitcoin and C#.

When he is not busy with any of these projects, he is traveling the globe as a guest speaker at various Bitcon conferences. Vortex is know to be very outspoken when it comes to anyone trying to stand in the way of or undermine Bitcoin and was a big voice in the UASF movement.

I caught up with him this last month to learn more about his new projects and to see what else he has going on. Vortex is a Bitcoin Maximalist through and through, and the one thing that is always consistent with him is he keeps it 100% real.

RJ: I was a software developer for 15 years, specifically working on web applications with asp.net C#.

Years in the $BTC game:

I first learned about bitcoin in late 2012.

You have been speaking at more conferences this year, how has this experience been for you?

There has certainly been a few takeaways from these experiences:

-Vast majority of people still don’t understand what blockchain is.

-There are alot of passionate bitcoin people out there, even more than I had hoped.

You are the host of the very popular podcast,The Bitcoin News Show. What is your podcast about and what motivated you to start doing this?

The BitcoinNews Show is a panel show where we interview a number of guests about the week’s bitcoin and cryptocurrency news. I make sure to always have guests that are working in the space so we’ve run the gamut at this point having on CEOs, CTOs, developers, hedge fund managers, investors, content creators and more. We do our best to provide our honest opinion to contrast the main stream media’s constant misunderstanding of bitcoin.

What can people learn from your show?

As I said, we try to have on many different guests with many different opinions so the knowledge range is actually quite large, but we make sure to keep it grounded with current events and actionable ideas.

After doing 87 shows, what inspires you to keep going?

The drive really comes from wanting to make sure the truth is told. Making sure bitcoin still has a chance. As bitcoin sign guy puts it, “We’re all just trying to provide covering fire for bitcoin to get out the door”.

What show have you done recently that really sticks out in your mind?

We did a great show with Rodolfo Novak discussing his new Cold Card device. This provides yet another level of hardware wallet security not seen in the industry thus far. Excited to get my hands on one. We’ve also just recorded an episode talking about providing data as a service over the lightning network paid for by crypto. And I think finally the most interesting one was speaking with Nik Bhatia about creating an interest reference rate for the Lighting Network from the concept of staking your bitcoin in the network to provide liquidity for channels to route value through.

How do you feel about the podcast market becoming more saturated with new people?

I’m all for more people learning about crypto. As I’ve stated for the past couple of years I believe this time will be looked back on as a Global Financial Renaissance. A time when humanity began to re-think how it understands the concept of money itself.

Why did you leave World Crypto Network and launch the The Cryptocast Network Channel?

There was some creative differences, but mostly it was just time for me to get out on my own and prove to the world that I could create great content that the bitcoin community could enjoy and learn from.

Is there anything new that you are hoping to explore or develop with your new channel that you weren’t able to do before the change for whatever reason?

The new channel will be a lot more technical. There will not be nearly as much talk about price, there will be no shows about trading. There will also be no daily news shows as I think there is plenty of people doing those.

What is your vision for The Crypto Cast Network?

I want to focus on getting the stories behind the actual members of the community, the people building projects for the crypto world. There is so much going on that it’s difficult to keep up, but I hope I can help provide some context for the world to look back on to see the bitcoin revolution first hand

When did you decide to launch your new class for developers called Programming With Bitcoin?

It was after listening to a talk by Elizabeth Stark in 2017 describing the future of Lightning Network. I realized that the world is going to need a lot of application developers working with bitcoin, far more than we have now.

So the concept of educating developers stuck in my mind. I then found out about Jimmy Song’s course and saw how he was teaching developers to work on bitcoin or rather to work directly with the protocol.

This was awesome, but protocol development is a highly specialized field so it was not accessible to most developers including myself. I had already been talking with the creator of the NBitcoin library Nicolas Dorier in his slack channel asking a few integration questions about both NBitcoin and BTCPayServer. Nic was very helpful and kind.

It was at this point that I realized how useful NBitcoin and BTCPayServer could be to the world and thought this could be a great way to get more developers working with bitcoin. I spoke to Nic and he was immediately on board. It turns out he was an experienced teacher having already earned his Microsoft Teaching certification and the rest is history.

What is your main goal in teaching this class?

The main goal is to get more application developers working with bitcoin. The reason why is because we need to build out the software infrastructure that will power this new decentralized monetary system and make it truly scalable and accessible to everyone on the planet. In order to do this we need developers building applications pushing the network’s utility further and further, creating new use cases, which will bring more users into the ecosystem making it more valuable which in turns brings more liquidity into the ecosystem at large which in turn will provide more opportunity for everyone around the world.

What kind of programming experience does someone need to take your class?

We only require 1–2 years of C# experience at most. You actually don’t need to know anything about bitcoin or blockchain to take this course. We go through all the fundamentals of what mining and full nodes are, making sure you have the framework necessary to understand all the concepts taught in the course.

Do you have any books or material you suggest students read before attending your class?

The best books on bitcoin today are Andreas’s, Mastering Bitcoin and Saifedean’s, The Bitcoin Standard.

Will you be giving away scholarships?

We are actively looking for companies to provide both sponsorship and scholarships for the Programming With Bitcoin course.

How can someone apply for one?

You can get in touch with us by visiting the contact page on ProgrammingWithBitcoin.com/contact and telling us how you’d like to help and from there you will be contacted by either myself or Nic.

Will you have a problem teaching students that might not align with your Bitcoin politics?

Of course not. All are welcome to learn how to program with bitcoin.

How do you feel about the word Blockchain?

At this point the hype is so strong it has rendered the term compeltely meaningless.

Who do you feel are the biggest enemies of Bitcoin?

The central banking cartel is what bitcoin is attempting to provide competition to.

What do you think about about how the world is regulating Bitcoin?

Currently it’s not going too bad. It is still very early days, but it appears for the most part that a light touch approach is being used in most countries.

How optimistic are you about Lightning?

Lightning is the order of magnitude scaling solution that bitcoin needed. I fully suspect LN to be integrated into every major part of the crypto ecosystem by end of 2019 which includes both wallets and exchanges. After that going into 2021–2022 we can expect merchant adoption to begin ticking up in a big way.

This will most likely be a condensed version of the previous bear market. I’m expecting us to begin our next rally either this fall, or next summer at the latest.

What is your Bitcoin prediction for 2020?

Where do you get your Bitcoin news?