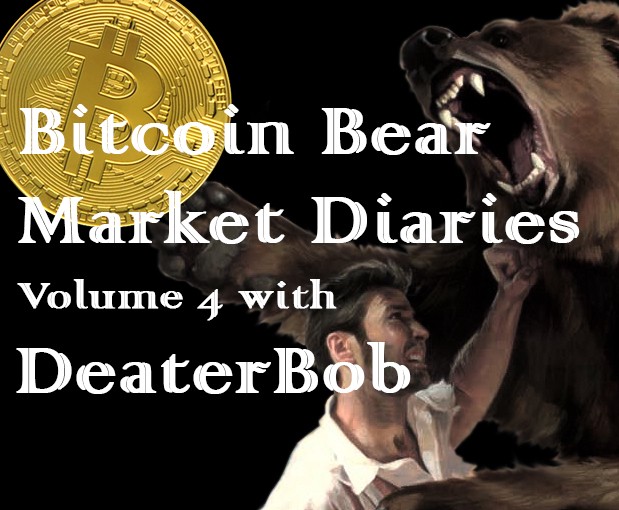 DeaterBob is a veteran Bitcoiner who has no affiliations or agenda and is ferociously protective of Bitcoin. He has earned the nickname “Savage Deater” for his epic rants and rebuttals calling out many of the top influencers in the space.

I’m active on twitter as @DeaterBob providing commentary and engagement with fellow bitcoiners. When I come across scammers or phonies, I go straight for the jugular!

It was definitely when Bitcoin hit $20,000. I broke down in tears! I didn’t cry because of financial gain though. I was overcome with a feeling of triumph over the doubters. I endured 5 years of belittlement from my peers for investing and believing in Bitcoin, and I was finally vindicated! I care immensely about Bitcoin’s success in general and no matter what anyone says, price does matter.

My account with Coinbase was “randomly” audited in early 2017, and they permanently shut down my account after I couldn’t prove what two two year old small BTC payments were for. I say good riddance!

The biggest threat to Bitcoin would definitely be the successful exploitation of a bug. All code pushes are extremely dangerous in this regard and that’s why all code pushes usher in a long period of uncertainty. The last bug sat there for two years unnoticed! A close second is a severe attempt by government to ban use of Bitcoin. This wouldn’t “kill” Bitcoin but it would surely delay “mass adoption”.

Bitcoin’s greatest potential added value to society is as a censorship resistant free market price discovery tool that provides a check and balance against reckless expansion of credit by commercial and central banks.

There will always be elite wealthy “trusted” entities like banks and governments willing to issue and trade credit with each other thus creating a credit market. I don’t hate fiat/credit. What I do hate is censorship or distortion of price discovery tools which creates an environment that is conducive for reckless credit expansion.

Gold and oil are the closest things to free market price discovery tools available but these assets fail to provide accurate or uncensored price discovery because the assets are too easily manipulated in modern massive paper markets due to burdensomeness of physical delivery, lack of trustless confirmation of physical delivery or holdings and in oil’s case price fixing by cartels (OPEC).

Bitcoin is the most easily deliverable hard asset of all time. Physical delivery and holdings can be confirmed in a trustless manor, and due to Bitcoin’s supply cap and decentralized nature, no cartels can form to control supply expansion or contraction to manipulate supply or price.

The financialization of bitcoin (the maturation of futures contracts settled in BTC, ETF’s, insured custodians) has the potential to add free market price discovery back into the global economy ending the central banking systems unchecked reign over the global economy!

Not trading more BTC for USD when price was above $15,000. The parabolic run caught me by surprise, and I was not mentally prepared. I never imagined price going so high so fast. The lesson learned was to always have a plan and that trading/spending coins you’ve had for years is OK. Bitcoin is just money after all…

Its got to be Vinny Lingham, no contest! He recommended people sell BTC at something like $2,000, supported the Bcash train wreck and issued an ICO token that lost 95% of its value.

I think the parabolic run went too high too fast and caused a panic for the exits. Also, to guys like me, its hard to think of this as a bear market when price is still up 75X from when I bought my first coins.

They are gun shy for sure but still very interested. When you look at market cap its only $60BB. it’s peanuts really. Investors still see lots of opportunity for growth. They’ll be back!

Absolutely amazing! Jack Dorsey recently stated that Lightning will be launched on the CashApp. Can the future look any brighter?

Every responsible person should have some kind of long term savings and what could be a better savings vessel than BTC?

There is nothing wrong with altcoins. I just think none are worth investing in. All altcoins are flavor of the moment tokenized hype schemes, because all altcoins will eventually be made obsolete either by a Bitcoin solution, by another new altcoin or the use case never catches on past a niche demand. Also, Bitcoin is the only fixed supply crypto that will last long term as such. All other fixed supply cryptos will either fork for more inflation or suffer hash death spirals or emergency difficulty adjustments.

I do not currently hold any altcoins. I do trade alts during periods of FOMO. Patiently waiting to trade again!

Maybe alts get pumped again when BTC starts its next bull run but who knows.

I think bitcoinization is a bit of a sales pitch. It implies that banks will basically cease to exist and fiat currency disappears, and I dont think thats going to happen. I am looking forward to the financialization of Bitcoin, and we will see what comes after that!

Abra and Bakkt. Both will help usher in the financialization of BTC.

Most recently its Kevin Pham. He doesn’t understand why storing things like video on the blockchain leads to the centralization of the network, and most of all, he doesn’t understand that a contentious fork is not Bitcoin and can never become Bitcoin. He has absolutely REKT his brand and reputation. SAD!

My favorites are Jimmy Song, Tuur Demeester and Peter Todd. They are very candid, genuine and have clean faces. Rare! All these guys know their stuff and are generous with information and have never peddled shitcoins.

What’s it going to take for this Bear market to turn around?

Time and fundamental news of adoption like Fidelity launching custodial services or Bakkt getting regulatory approval. It’s already been 14 months since the last peak. Confidence is slowly returning. The ultimate bullish event would be a government, bank or corporation announcing official long term holdings of BTC.

Very bullish. As long as no one puts a bug in the code, its clear skies ahead given a long term perspective.

Don’t let “news” scare you, slowly stack BTC over time and treat it like a long term savings account. Never FOMO buy! A great goal for a middle class person is owning 2.1 BTC. Owning 2.1 BTC is one ten millionth of the supply and an equal equivalent of gold that is worth $800,000 today.

Storing Bitcoin is serious stuff. If you don’t take it seriously you will end up rekt. I recommend a Trezor because you own your own keys, and the setup is very easy because the website gives a walk through. Not your keys not your coins!

Follow Jimmy Song, Tuur Demeester, and Peter Todd on twitter. They could make up your whole feed, and you would be well informed and learn more than you could imagine.

When I was a noob the worst mistake I ever made was having blind faith in “influencers.” Max Keiser once shilled shitcoins like Startcoin and Maxcoin. I bought them and I ended up REKT lost many BTC that I should have just kept saving. Stick to BTC!