AI Hotspots Across the US: Where AI Pros Are Thriving 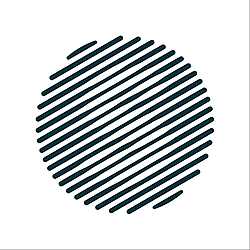 You get tech. We get you. Let's take you further: https://seen.news/hackernoon

Whether you used GPS to get to work or added a recommended add-on item to your online shopping cart, AI has likely touched your life in one way or another this very day. But does the increasing presence of AI in our day-to-day actually benefit us in more than just adding convenience to our lives? For tech pros, the answer is likely yes.

Organizations like Gartner have produced studies that suggest AI will actually create more jobs than it destroys. Gartner found that AI is set to create 2.3 million jobs by 2020, while eliminating 1.8 million. That’s still a net increase of half a million jobs by the decade’s end. According to Gartner’s study, “AI will improve the productivity of many jobs, eliminating millions of middle- and low-level positions, but also creating millions more new positions of highly skilled, management and even the entry-level and low-skilled variety.”

Based on research by the Indeed analytics team, we’ve put together a look into the current state of AI, from the hotspots to the top roles.

Machine learning leads as the top job in AI

Based on data on the most sought-after AI jobs posted on Indeed that included the keywords “artificial intelligence” or “machine learning” in their job description, machine learning and deep learning engineering roles reign supreme in terms of percent of job postings containing AI or machine learning skills. 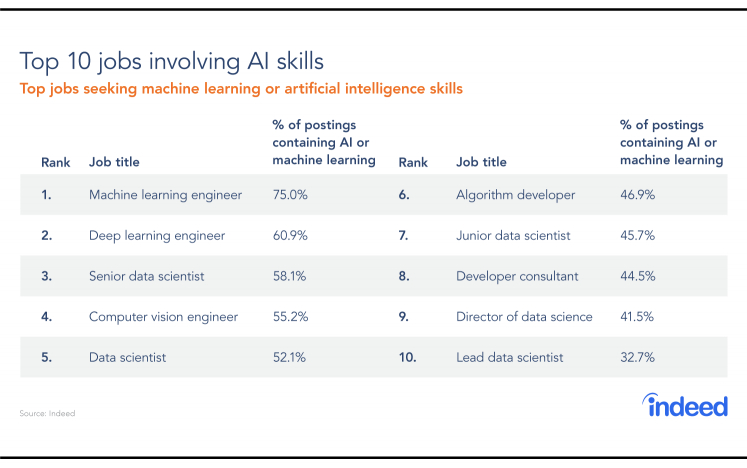 These findings were unsurprising, considering these roles function to develop technology that uses predictive algorithms. These two roles also held the top two positions in 2018, though machine learning engineer dropped in terms of the percentage of postings containing these keywords (from 94.2% in 2018 to 75% in 2019).

There were several newcomers to the top AI jobs list in 2019 that we haven’t seen in years past. New additions to the list include deep learning engineer, senior data scientist, junior data scientist, developer consultant, director of data science and lead data scientist. These six roles replaced the following six roles, which made the list in 2018: Director of analytics, statistician, principal scientist, computer scientist, research engineer and data engineer. According to the Indeed analytics team, this change in the top ten jobs year-over-year could be due to the growing need for fully built out data engineering teams.

In addition to looking at the most in-demand AI roles, the Indeed analytics team also looked at the highest paying jobs in this field over the last year. Notably, some of these salaries have increased from the previous year’s numbers by 5% or more. So what kind of salaries are we talking, exactly? 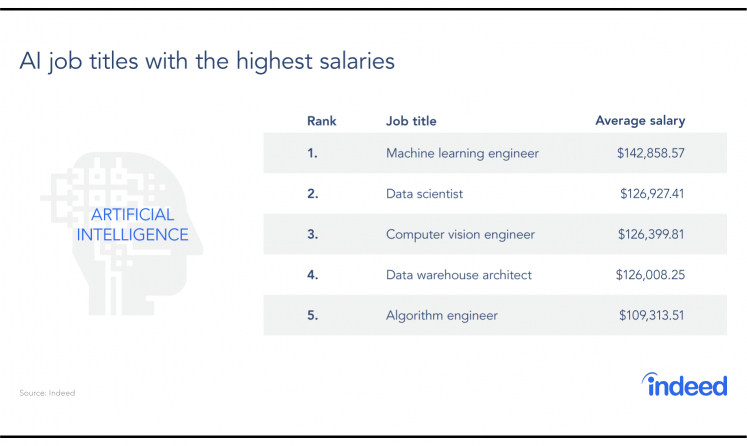 Machine learning engineering dominates the list of the highest paying jobs by a significant amount, coming in at $142,858.57, which is a rise from the third position in 2018. With an increase of roughly $8,400—or 5.8%—machine learning engineering continues to be a lucrative career path with plentiful job opportunities. The next highest role, data science, is roughly $15,000 lower—but still nothing to sniff at—coming in at just under $127,000. In fifth place, we have algorithm engineer, which received a 5% salary bump year-over-year. With an average salary of $109,313.51, that’s an increase of $5,200.

According to Indeed, the highest paying jobs of last year that didn’t make the list in 2019 include director of analytics, data engineer, statistician, computer scientist and research engineer, which mirrors the data gathered about the top jobs involving AI skills. The Indeed analytics team suspects this can be attributed to the AI market becoming more mature, with a greater need for more specialized roles.

Based on job postings related to AI or machine learning, Indeed pulled the top cities with the highest share of AI jobs in 2019. Though similar to the list of top AI cities in years past, 2019 did see a newcomer to the list. 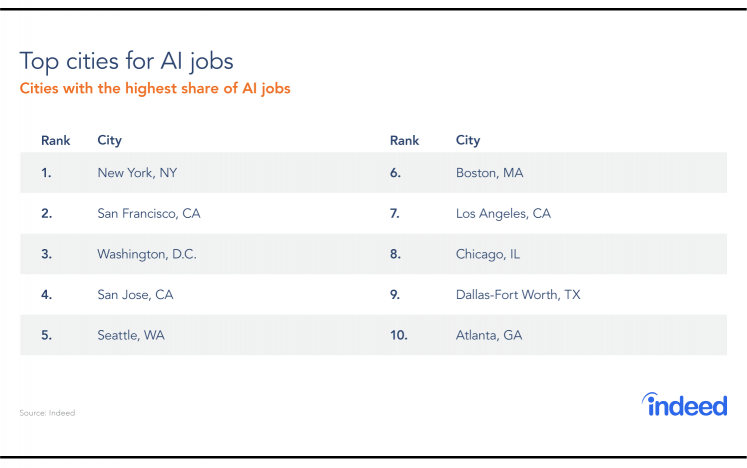 New York and San Francisco are the best cities for AI jobs in 2019, perhaps unsurprisingly, just as they were in 2018. With both of these cities home to a diverse array of industries, the fact that they still claim these top two positions is a testament to the wide application of artificial intelligence and machine learning as these technologies continue to develop and improve.

That being said, New York is losing its lead in terms of number of AI jobs, going from 11.6% share in 2018 to 9.72% in 2019. San Francisco dropped too, though not nearly as significantly, from a share of 9.6% to 9.2%, which closed the gap between these top tech hubs dramatically.

As for the rest of the placements, not much has changed apart from subtle shifting. For example, DC ranks 3rd this year and San Jose 4th, while they were flipped in 2018. Similarly, Los Angeles and Chicago flipped places and now sit at 7th and 8th place, respectively. Notably, Philadelphia claimed the 10th spot last year, only to be replaced by newcomer Atlanta in 2019.

According to Indeed’s analytics team, “this year’s drop suggests there could be more open jobs than qualified workers to fill them. Much of tomorrow’s AI workforce may still be in school or awaiting training.” Look at the decrease in interest in AI jobs as a positive thing, as this reduces the competition for each role, which is especially promising if you are a new or soon-to-be graduate looking to join this lucrative space in tech.

With a growing job market and high salaries but few qualified workers to fill these positions, AI roles like machine learning, deep learning and algorithm development are great specializations to focus on as you go with the volatile flow of this unpredictable yet rewarding tech industry.

Can I Grade Loans Better Than LendingClub?